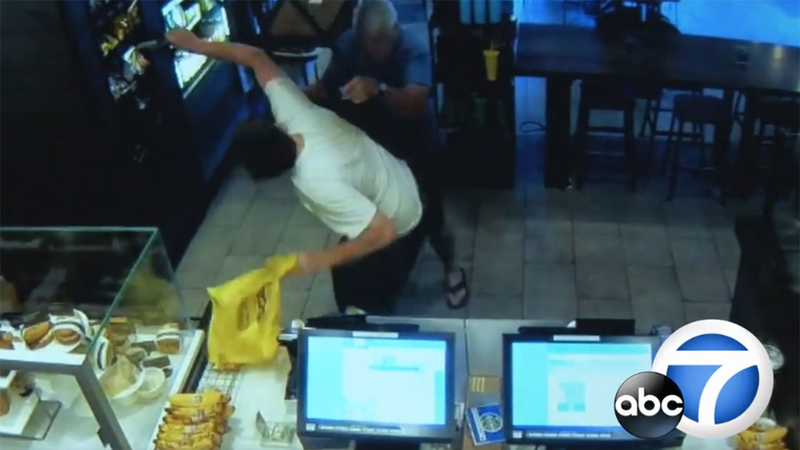 Fresno armed robbery suspect may sue man who thwarted him

FRESNO, Calif. (KABC) -- A good Samaritan who stepped in to stop an armed robbery at a Starbucks in Fresno may be facing a lawsuit from the suspect, who suffered stab wounds in the struggle with the man.

The mother of the suspected armed robber says the man who stepped in to stop her son went too far, nearly killing him.

She told the Fresno Bee her son almost died from stab wounds incurred in the struggle.

Video from the Starbucks allegedly shows the suspect, Ryan Flores, wearing a Transformers mask and displaying a gun - later identified as fake - in an attempt to rob the Fresno coffee shop.

He also at one point threatens the barista with a knife.

The video also shows a customer in the shop, later identified as Craig Jerri, come up from behind the robber and hit him with a chair. The two are then seen struggling and eventually wrestle to the ground.

Police reports indicate that the suspect, Flores, stabbed Jerri during the struggle. But Jerri apparently managed to wrest the knife away and stabbed Flores multiple times as well.

Flores' mother said her son nearly died in intensive care from the stab wounds and believe he used excessive force. The family is considering a lawsuit.