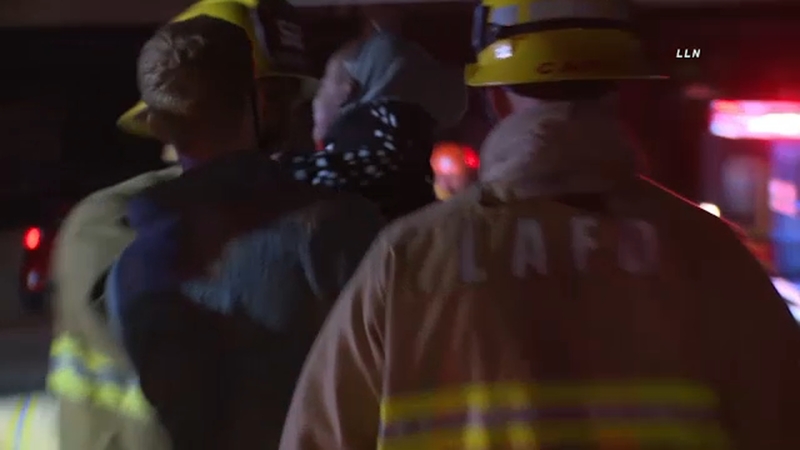 Man rescues toddler after deadly crash on 101 Freeway in Hollywood

HOLLYWOOD, LOS ANGELES (KABC) -- A good Samaritan is being credited with rescuing a 2-year-old boy from the wreckage of a vehicle after a deadly crash on the 101 Freeway in Hollywood Monday night.

The crash occurred near Santa Monica Boulevard about 9:25 p.m. Monday when a Hyundai Accent slammed into a wall along the right-hand side of the freeway, according to Officer A. Rice of the California Highway Patrol.

A preliminary investigation determined the 2012 Hyundai Accent had gone off the freeway onto an embankment, striking several objects and crashing into a fence before returning to the freeway and coming to a stop in the No. 4 lane, Rice said.

The driver, identified as 23-year-old Arin Pugh, was killed in the crash but the boy was still trapped in the wreckage.

That's when a man pulled over and got the boy out of the car.

"We just saw the car smoking, so we pulled over, ran over, heard a baby crying... opened the door and the baby was okay, then pulled the baby out," said the man, who identified himself only as Josiah.

The toddler was taken to the hospital with a minor head injury, according to the CHP collision report.

It was unknown if drugs or alcohol were factors in the crash, Rice said.

Anyone who witnessed the crash was urged to call the Central Los Angeles California Highway Patrol Office at 213-744-2331.