Grapevine reopens as storm continues to move through SoCal 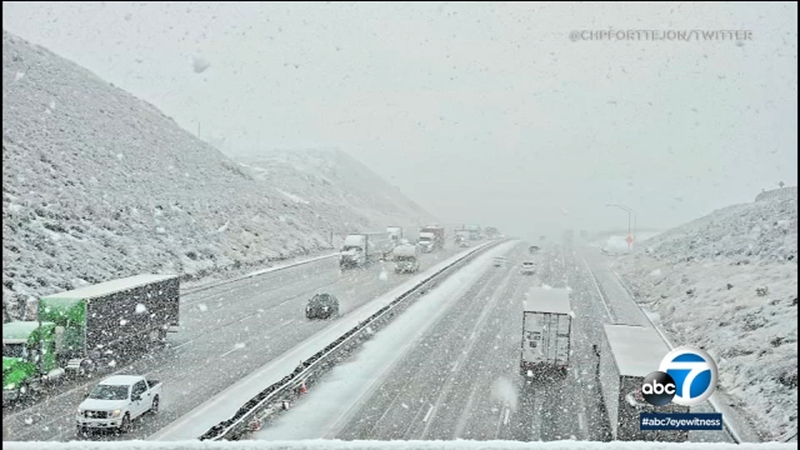 GRAPEVINE, Calif. (KABC) -- As a heavy winter storm moves into Southern California, traffic through the Grapevine is expected to be slow-moving and could be halted at times over the next two days.

Monday night, the CHP shut down traffic through the Grapevine for more than an hour as the storm began.

CHP officers shut down the southbound side of the 5 Freeway at Grapevine Road in Kern County and the northbound side at Parker Road in Castaic.
The CHP started holding traffic around 5 p.m. and then implemented a full shutdown by about 5:45 p.m. Drivers who were stuck in the area were being escorted off the freeway.

But conditions later cleared up and CHP officers had both sides of the freeway open again by 8 p.m.

Drivers who have to use the Tejon Pass are advised to use caution and expect delays as the rain and snow continue over the next several days. At least a foot or more of snow is expected in mountain communities, while the lower-lying communities could see several inches of rain Monday, Tuesday and Wednesday.
Report a correction or typo
Related topics:
trafficcastaiclos angeles countychpsnowroad closure
Copyright © 2021 KABC Television, LLC. All rights reserved.
TOP STORIES
Light rain moves through SoCal Tuesday with more expected this week
More than $100,000 worth of jewelry stolen in DTLA robbery, police say
13-year-old boy killed, 2 wounded in Wilmington shooting
2 people robbed at gunpoint during holiday party in Pacific Palisades
50 mutations in omicron could be its downfall, data shows
Former LADWP general manager to plead guilty to federal bribery charge
113 LAFD firefighters put on unpaid leave due to vaccination mandate
Show More
LA County reports 3rd case of omicron variant
School officials could face charges in Michigan shooting: prosecutor
Remembering the Japanese-American heroes who fought in WWII
Devin Nunes stepping down from Congress by end of 2021
Kentucky Derby winner Medina Spirit dies after workout in Arcadia
More TOP STORIES News