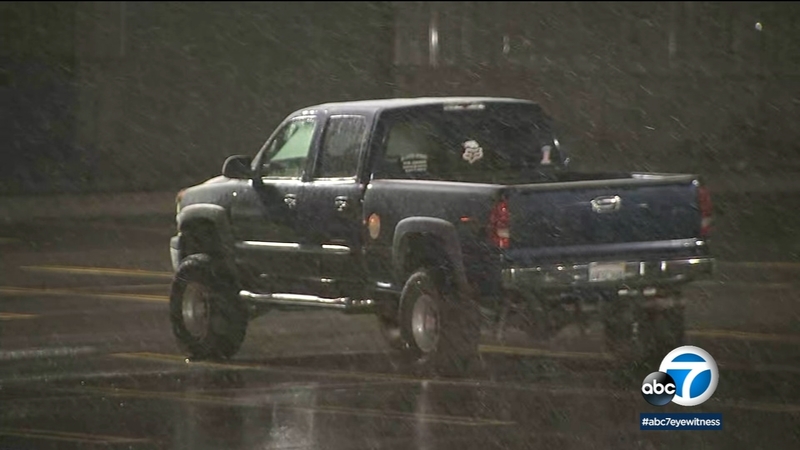 SANTA CLARITA, Calif. (KABC) -- A storm moving into the Southland from Northern California brought rain and snow Thursday evening, as officials warned of delays and even a closure through the Grapevine.

The Grapevine was open Thursday night as the storm brought snow to the Grapevine above 4,000 feet. The California Highway Patrol spent the night escorting cars and semi-trucks through the stretch of the 5 Freeway around Frazier Park, preventing vehicles from speeding on the steep, wet, slippery freeway.

Caltrans said it stopped escorting traffic shortly before 11 p.m. and that all lanes were open.

The CHP still cautioned motorists to drive safe even though they do not believe the Grapevine will have to be closed.

Travel on mountain roads, including the 5 Freeway, could become difficult or impossible, just as storms on Christmas and Thanksgiving proved.

A storm on Christmas Day prompted a more than 36-hour closure of the Grapevine, leaving drivers stranded with many sleeping in their vehicles overnight.

Lauren Stein lives in Frazier Park, but commutes to work in Santa Clarita. She said she's tired of all the snow, but didn't think the storm will be as bad as the Christmas storm.

"I just choose not to drive," Stein said. "I don't have the car for it, and then people get stuck and can't get anywhere and make traffic worse."

The Grapevine closed twice on Thanksgiving as heavy snow made driving conditions on the major thoroughfare treacherous.

Wind advisories are in effect in higher elevations through Friday at 4 a.m., which could create hazardous conditions, particularly for big rig drivers.