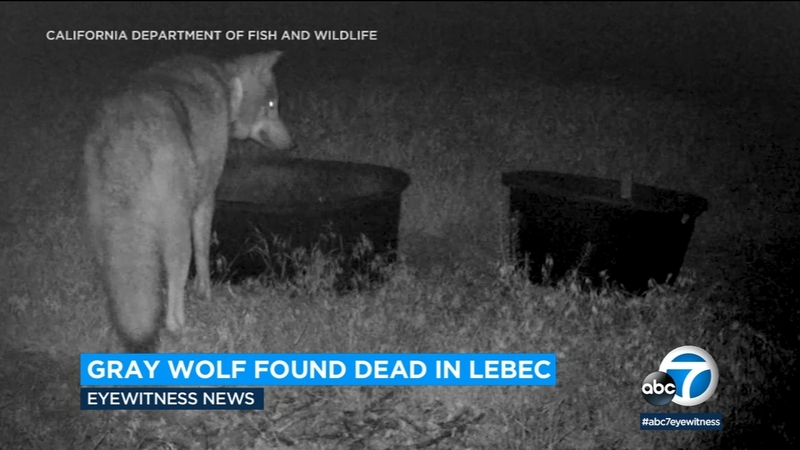 SACRAMENTO, Calif. -- An Oregon-born gray wolf that thrilled biologists as it journeyed far south into California was found dead after apparently being struck by a vehicle, authorities said Wednesday.

No foul play was suspected in the death of the male wolf known as OR93, the California Department of Fish and Wildlife said in a news release. Gray wolves are listed as endangered in California, where they were wiped out by the 1920s.

"Before his demise, he was documented traveling the farthest south in California since wolves returned to the state, which is historically wolf habitat. The last documented wolf that far south was captured in San Bernardino County in 1922," the department said.

A truck driver reported spotting the dead wolf on Nov. 10 near the Kern County town of Lebec, about 75 miles northwest of downtown Los Angeles.

The carcass was located along a dirt trail near a frontage road running parallel to Interstate 5, and a warden who responded quickly identified the wolf as OR93 because of a radio tracking collar it wore, the department said.

Wild hogs are running rampant in Corona and residents say it's becoming a growing problem that's posing a threat to the safety of families and pets all across the area.

OR93 was born to the White River pack in northern Oregon in 2019. He went into California's Modoc County on Jan. 30, 2021, returned to Oregon briefly, then again entered California on Feb. 4 and headed south.

His last collar transmission was from the central coast's San Luis Obispo County on April 5. By then he had traveled at least 935 miles in California, the wildlife department said.

OR93 was among a small number of gray wolves that have begun coming to California from other states.

"I'm devastated to learn of the death of this remarkable wolf, whose epic travels across California inspired the world," Amaroq Weiss, senior wolf advocate at the Center for Biological Diversity, said in a statement.

"In this annual time of reflection, I thank him for the hope he gave us and for a brief glimpse into what it would be like for wolves to roam wild and free again," Weiss said.