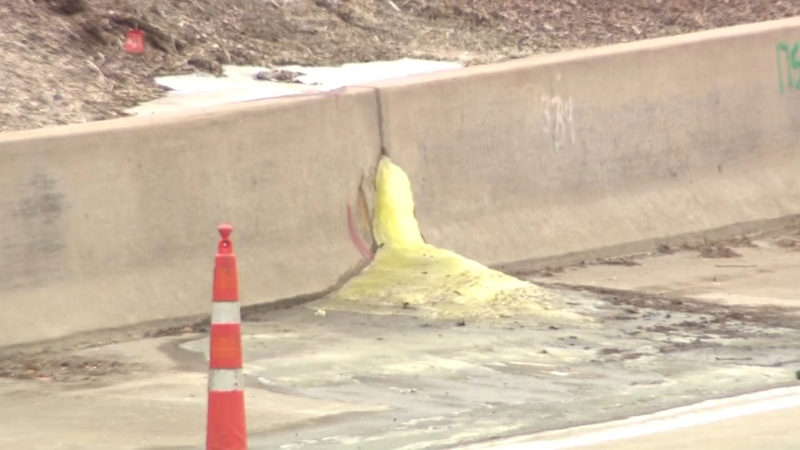 MADISON HEIGHTS, Michigan -- Michigan officials closed portions of a highway over the weekend after a hazardous greenish-yellow liquid was found oozing onto the roadway from a barrier.

Michigan State Police troopers were asked to block off the right lane of Interstate 696 in Madison Heights, about 13 miles north of Detroit, on Friday afternoon so the local fire department could clean up the spill.

Officials later discovered that a commercial business nearby had been leaking the chemical hexavelent chromium, which ran from the basement of the building into the ground and exited through the drain that empties onto the highway, police said.

Once the substance came up through the drain, it froze into a yellow blob, police said, citing the U.S. Environmental Protection Agency.

Workers disposed of the frozen waste by scooping it up in an excavator and placing it in a safe container, police said. The cleanup was expected to take all weekend.

"Please use caution as there will be workers in the area. And a yellow blob," police wrote on Twitter.

The metal gained notoriety after the release of the Oscar-winning 2000 drama "Erin Brockovich," in which Julia Roberts played the real-life woman who discovered a cover-up involving contaminated water in California.