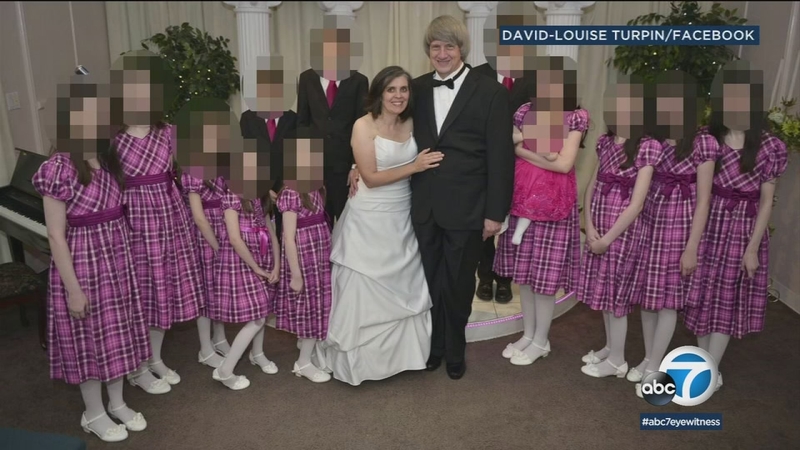 The 17-year-old victim who alerted authorities had been working on the escape plan for two years. She and another sibling broke free by climbing out of a window. The other sibling turned back out of fear, but the teen persisted and called 911.

The torture and false imprisonment charges do not include the 2-year-old, who was not malnourished, Hestrin said.

These are the accusations against David and Louise Turpin, outlined during a news conference Thursday:

- As punishment, the victims were allegedly tied up with ropes for weeks or even months at a time. One victim reported being hogtied in one instance. When that victim was able to escape the ropes, the parents reportedly began using chains and padlocks to restrain the victims to their beds.

- In addition to being tied up, the victims were also frequently beat and even choked, Hestrin said.

- The victims were allowed to shower only once a year, Hestrin said. One of the reasons for being punished was if the siblings were found to have washed their hands above their wrists. The parents would then accuse the siblings of "playing in the water" and then punish them.

- Evidence from inside the home indicate the victims were often not released from their chains to go to the bathroom.

- When the victims were found, they were severely malnourished. Hestrin said they suffer from severe caloric malnutrition associated with muscle wasting. The victims were fed very little on a schedule. A 12-year-old victim was the weight of a typical 7-year-old, Hestrin said. A 29-year-old female victim weighed 82 pounds.

- Several of the victims were found to have cognitive impairment and neuropathy, which is nerve damage, as a result of this extreme and prolonged physical abuse.

- The victims lacked basic life knowledge. Many didn't know what a police officer was, and also did not know what pills and medicines were.

- The parents would apparently buy food, like apple and pumpkin pies, and leave it on the counter - and not let the starving children have any.

- None of the victims had seen a doctor in more than four years, and none had ever seen a dentist.

- The victims were not allowed to have toys, although many new, still-packaged toys were found in the house.

- About the only thing the victims were allowed to do was to write in journals. Investigators have recovered hundreds of them, and they're combing through them for evidence.

- The siblings were reared on the graveyard shift, with the family staying up all night and going to bed shortly before dawn.

If convicted of all charges against them, the Turpins face up to 94 years to life in prison. They have pleaded not guilty and are being held on $12 million bail.
EMBED More News Videos

The Corona Chamber of Commerce is holding its monthly breakfast Friday, and some of the funds will go toward helping the Perris abuse victims.