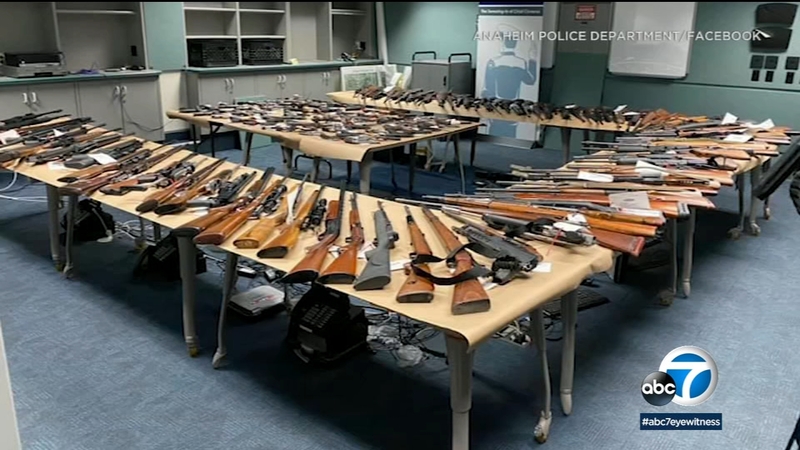 ANAHEIM, Calif. (KABC) -- Police seized more than 150 weapons, many of them illegal or unregistered, and thousands of rounds of ammunition during a search of an Anaheim residence this week, police said.

Daniel Scott Moore, 42, was charged with a felony count each of possession of an assault weapon, possession of a firearm by a felon, a prohibited person owning ammunition and manufacture, sale or receipt of a large-capacity magazine while prohibited from doing so. Moore, who is being held on $20,500 bail, pleaded not guilty on Wednesday and was ordered to return to court Dec. 27 for a pretrial hearing in the North Justice Center in Fullerton.

In a separate case, Moore is also charged with possession of a controlled substance and driving on a suspended license, both misdemeanors.

Police also arrested Aaron Ollen Linss, 54, on suspicion of weapons charges, but he posted bail and it is unclear if he has been charged yet.

Police were called to a home at Archer Street and Broadway Monday where a security alarm was activated, according to Anaheim police. When officers arrived, authorities say they noticed the front door was open and a resident asked them to go inside to make sure there were no intruders.

While in the home, they saw high-capacity magazines and rifles that appeared to be illegal, according to police.

They then got in touch with Moore in the backyard and determined he was not allowed to own a gun due to criminal history, authorities said.

After obtaining a search warrant, police seized 156 firearms, with about 20 being illegal due to modifications.

One of the weapons was a "ghost gun'' that was put together piece by piece but deemed illegal because it had not been registered, police said.

Anaheim detectives are working with the ATF during the investigation.