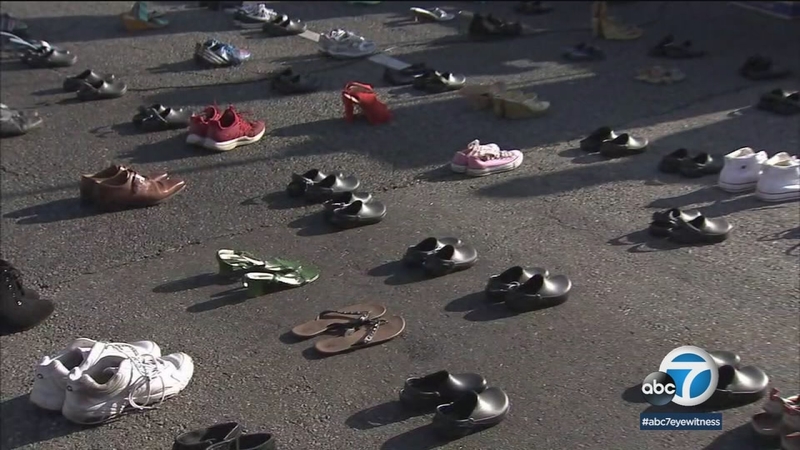 SOUTH LOS ANGELES (KABC) -- In the middle of Vermont Avenue in South Los Angeles, hundreds of shoes lined the pavement as part of a demonstration against gun violence.

Each pair represented a victim of gun violence. Hundreds of people held signs and chanted "not one more."

Both Sheriff Jim McDonnell and LAPD Chief Michel Moore were at the event for the day of action against gun violence, which takes the lives of tens of thousands of people each year.

"Your lives will never be normal again. It is so hard every anniversary, every birthday, every holiday - he's missing from our lives," said Lizz Dominguez-Phillips, who is the aunt of a person killed in Wilmington.

Husbands and wives, mothers and fathers, and sons and daughters have all been killed. One of those people affected by the violence is 9-year-old Nathalia Jackson, who is now a public speaker against guns. She has been forced to grow up after her father Kenny was murdered four years ago.

"I really want to make my mom happy because she really misses my father. I know that. So when I speak, I try to leave a message that will stay in people's hearts forever," Nathalia said.

Eyewitness News spoke with Techea Adams, whose son Kejon, a football player at Long Beach City College, was murdered in 2015. He was shot in the head half a block away from home while out for a morning jog.

"I barely watch the news. I can't look at Facebook because every time I see somebody get murdered, it's just like my son getting murdered all over again. It hurts," she said.

Kejon's murder remains unsolved, but earlier this week the L.A. County Board of Supervisors renewed the $10,000 murder reward for information that will lead to his killer.