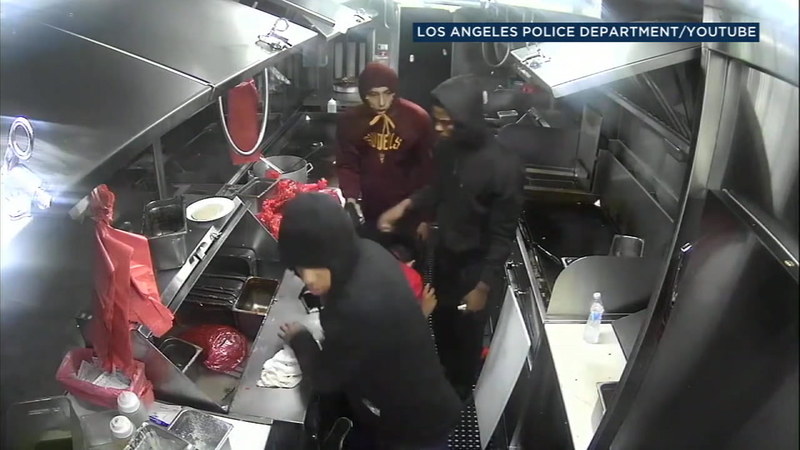 SOUTH LOS ANGELES (KABC) -- Police released video of armed men robbing a taco truck in South Los Angeles last month, an incident in which one of the workers was pistol-whipped.

In the video, the suspects forced the workers to the ground, demanded money and unsuccessfully attempted to gain access to a safe in the 1300 block of West Manchester Avenue shortly after 3 a.m. on July 14, according to the Los Angeles Police Department.

The suspects all appeared to be in their 20s, police said. They all had hoodies on with the hoods pinched to try and hide their faces.

"These are hardworking people and they were victimized by these suspects who are out to make a quick buck. The suspects took off with the victims' cellphone, property, cash, other items," Officer Tony Im said.

Rex Elias, a customer at the truck, said one of his favorite parts of living in Los Angeles is eating at taco trucks. He said he saw the surveillance video.

"After seeing that video, I'm like wow, how can somebody do something like this to people just doing good, doing their own hustle, getting by in their life? People are trying to ruin that...it's a taco spot, c'mon," he said.

Since the robbery, a security guard now patrols outside of the truck.