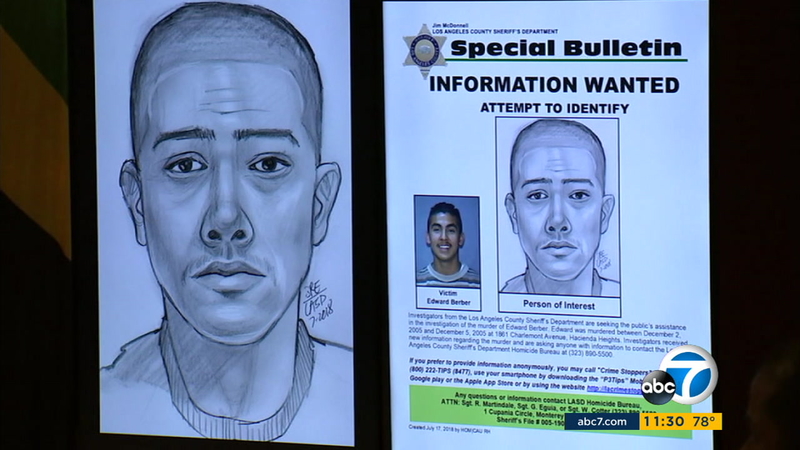 LOS ANGELES (KABC) -- After 13 years of the trail going cold, the Los Angeles County Sheriff's Department was able to release a sketch of a person of interest in a 2005 unsolved murder that took place in Hacienda Heights.

The case revolves around the death of Edward Berber, whose body was discovered in his own home.

The department said it's hoping that someone may recognize the individual in the sketch and identify him.

"We believe we can show you the face of a killer, and you, the public, can bring peace and justice to the family," LASD Sheriff Jim McDonnell said.

With a new set of investigators with fresh eyes and new technology, officials said they believe they are close to a break in the case.

The father of two young children was murdered in early December 2005 at his home, located in the 1800 block of Charlemonte Avenue.

Berber's mother found her son shot to death in his bed after she went to check on him when he didn't show up for work. Investigators said there were no signs of forced entry to the house, and nothing was taken.

Homicide detectives said they re-interviewed witnesses to come up with the new sketch but can't say there was any known relationship between the person of interest and the victim.

"Anybody that can think of anything, knows of anybody, anything, we ask that you please call," the victim's sister said.

The sheriff's department is offering a reward of $10,000 for information leading to an arrest in the case.