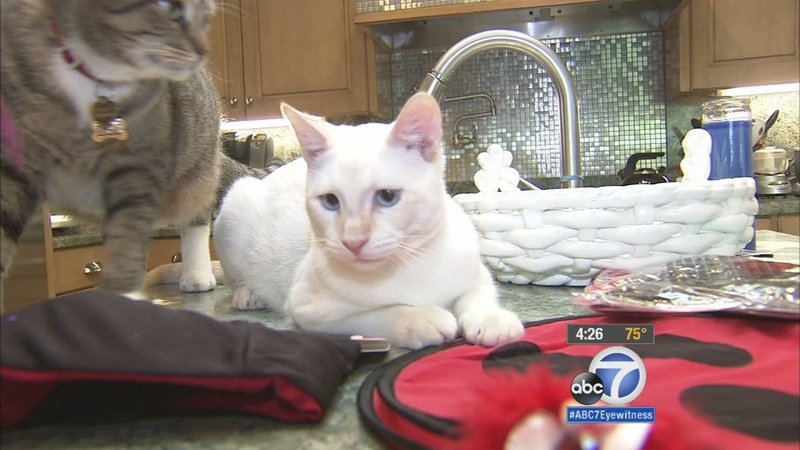 LOS ANGELES (KABC) -- Masked strangers, a constant doorbell and chaos - it can be fun for people on Halloween, but not for pets.

"All the sudden they're going to see a group of these goblins and whatever coming at them where they don't see the face," veterinarian Dr. Jeff Werber said.

Werber says dogs have an amazing ability for facial recognition, but they can get confused on Halloween.

"Even the sweetest dog might become fearful," he said.

He suggests putting them in a room away from the buzz and strange noises, perhaps with the TV on.

Then, there are the treats. Raisins and chocolate can be especially toxic.

Chocolate contains theobromine, an ingredient that is harmful to dogs. Vets say dark chocolate is one of the most common causes of dog poisoning.

But don't panic if you see your pet accidentally pick up a treat. Dr. Jeff says if your pet has one or two pieces of candy it's probably going to be okay. The problem is they don't stop at one and they don't take the wrapper off.

"If they get into something, they're not going to eat just a bite - they're going after the whole thing. And then the wrappers become a problem, too, because we can actually see intestinal blockages because of wrappers," Weber said.

Also, be careful to keep sugar-free treats away from surfaces where pets can reach them. The xylitol in these candies is toxic.

Dr. Werber also points out a danger that comes with the legalization of medical marijuana, especially for pets that get hold of marijuana in baked goods.

Dogs aren't the only pets at risk, there's also a caution for cats when it comes to candle lit jack-o'-lanterns.

"Cats are intrigued by flame, and you don't want them coming and batting at something," he said.