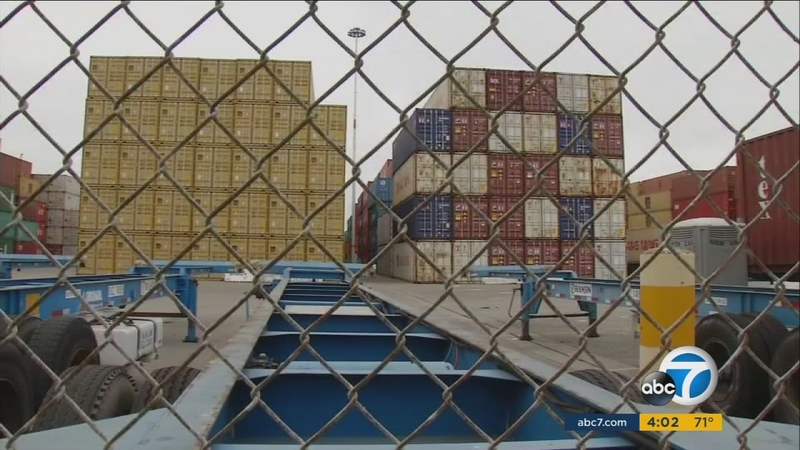 LOS ANGELES -- Some major retailers are scrambling to work out contingency plans to get their merchandise to stores as the bankruptcy of the Hanjin shipping line has thrown ports and retailers around the world into confusion.

They don't have a lot of time. Giant container ships from the South Korean-based Hanjin shipping line are marooned with their cargo of what experts say are lots of TVs and printers, but also loads of home furnishings and clothing.

Hanjin, the world's seventh-largest container shipper, filed for bankruptcy protection Wednesday and stopped accepting new cargo. With its assets being frozen, ships from China to Canada were refused permission to offload or take aboard containers because there were no guarantees that tugboat pilots or stevedores would be paid. It's also been a factor in shipping rates rising and could hurt some trucking firms with contracts to pick up goods from Hanjin ships.

The South Korean giant represents nearly 8 percent of the trans-Pacific trade volume for the U.S. market. While some retailers may already have merchandise for the holiday season affected, experts say what's most important is that the issue be resolved before the critical shipping month of October.

"Retailers always have robust contingency plans, but this degree of uncertainty is making it challenging to put those plans in place," said Jessica Dankert, senior director of retail operations for the Retail Industry Leaders Association, a trade alliance with members including companies like Best Buy, Wal-Mart and Target.

J.C. Penney said Hanjin is one of several ocean freight carriers that it uses and when it learned there might be an issue it began to divert and reroute its containers. It said it uses "a variety of transportation methods and ports" and right now does not expect a significant effect on the flow of merchandise.

Target Corp. said it is watching the situation closely and Wal-Mart said it is waiting for details about Hanjin's bankruptcy proceedings and the implications to its merchandise before it could assess the effect.

As of Friday, 27 ships had been refused entry to ports or terminals, said Hanjin Shipping spokesman Park Min. The Seoul-based company said one ship in Singapore had been seized by the ship's owner.

At the ports of Los Angeles and Long Beach, the nation's busiest port complex, three Hanjin container ships ranging from about 700 feet to 1,100 feet (213 meters to 304 meters) long were either drifting offshore or anchored away from terminals on Thursday. A fourth vessel that was supposed to leave Long Beach on Thursday morning remained anchored inside the breakwater.

"Hanjin called us and said: 'We're going bankrupt and we can't pay any bills - so don't bother asking,' " said J. Kip Louttit, executive director of the Marine Exchange of Southern California, which provides traffic control for the ports of Los Angeles and Long Beach.

That's meant cargo headed to and from Asia is in limbo, much to the distress of merchants looking to stock shelves with fall fashions or Christmas toys. "Someone from the garment industry called earlier today asking: 'How long is this going to go on, because I've got clothing out there,'" Louttit said.

Chris Rogers, a research analyst at Panjiva, which tracks international imports to the United States, said the situation isn't yet dire but could become so. October is the busiest month for cargo from South Korea to the U.S., accounting for about 11.5 percent of the annual total.

But South Korea's maritime ministry said Hanjin's troubles would affect cargo exports for two to three months, given that August-October is a high-demand season for deep-sea routes.

The Retail Industry Leaders Association wrote to U.S. Secretary of Commerce Penny Pritzker and Federal Maritime Commission Chairman Mario Cordero on Thursday, urging them to work with the South Korean government, ports and others to prevent disruptions. It said the bankruptcy is rippling through the global supply chain and could cause significant harm to consumers and the U.S. economy.

"There (are) millions of dollars' worth of merchandise that needs to be on store shelves that could be impacted by this," said Jonathan Gold, the National Retail Federation's vice president for supply chain and customs policy.

The confusion might also sink some trucking firms that contract with Hanjin to deliver cargo containers from ports to company loading bays. "They've got bills to pay - they could literally close their doors over this," said Peter Schneider, Fresno-based vice president of T.G.S. Transportation Inc.

Other shipping lines may take on some of Hanjin's traffic - but at a price. Since many vessels already are operating at high capacity, shippers may wind up paying a premium to squeeze their containers on board, said Jock O'Connell, international trade adviser to Los Angeles-based Beacon Economics.

The price of shipping a 40-foot container from China to the U.S. jumped up to 50 percent in a single day, said Nerijus Poskus, director of pricing and procurement for Flexport, a licensed freight forwarder and customs broker based in San Francisco.

Global demand and trade have suffered since the 2008 recession, but steamship lines continued to build more and larger vessels. That weaker trade and overcapacity have sent ocean shipping rates plunging in recent years. A few months ago, Poskus said, prices hit historic lows globally - down to as much as $600 per container from Shanghai to Los Angeles. That wouldn't even cover fuel costs for the huge ships, he said.