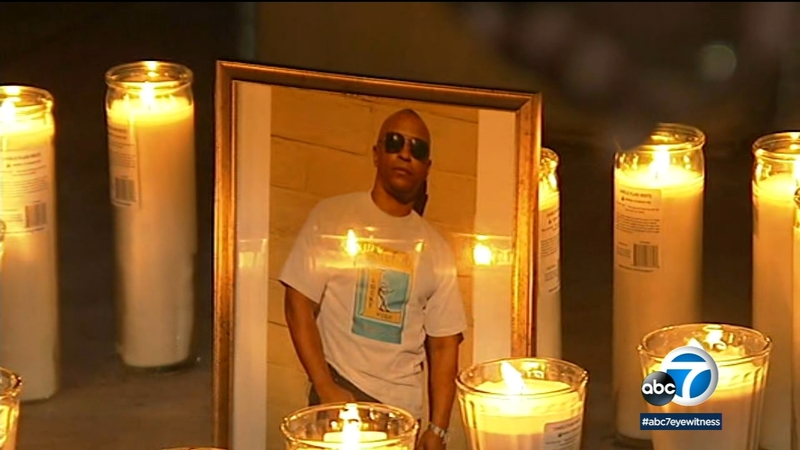 SAN PEDRO, LOS ANGELES (KABC) -- A beloved grandfather was playing cards when he was gunned down at a San Pedro park Tuesday.

Emotions ran high as those who knew 57-year-old Eric Guillory stood in the spot where he was killed.

"This wasn't meant for him. He was the most nicest person ever," said Kimmone Lewis, the victim's granddaughter.

Guillory's shooting death was just 24 hours before four other people were shot in the Wilmington area.Two people died and two others were injured by a lone shooter, police said.

"There is gang activity in the area. There have been shootings lately. We had a homicide in San Pedro last night," said Captain Jay Mastick, with LAPD.

A San Pedro homeowner shot and killed a burglar as he was trying to break in through a window Thursday morning.

A man was shot and killed after a fight near 140th and Vermont in San Pedro Friday.

LAPD Harbor Division says these crimes don't appear to be connected. In all of these cases, except the home invasion, the suspects were still outstanding.

If anyone has any information about any of the cases, they are asked to contact the LAPD Harbor Division.
Report a correction or typo
Related topics:
harbor citywilmingtonsan pedrolos angeles countycrimegang violencegang activityshootinggang
Copyright © 2022 KABC Television, LLC. All rights reserved.
TOP STORIES
Death toll rises to 21, mostly children, in TX school shooting
Uvalde school shooting: What we know about 19 kids, teacher killed
Watch Steve Kerr's raw, emotional plea after Texas shooting
CA water board adopts ban on watering some green spaces amid drought
Suspect wounded after CHP, deputies are fired upon in East LA
Mater Dei HS celebrates 3 Heisman Trophy winners amid controversy
More water restrictions expected this summer
Show More
Biden says 'we have to act' after Texas school shooting
What is monkeypox? CDC updates doctors as CA reports 1st possible case
11 killed in shooting attacks on 2 bars in Mexico
How to talk to kids about Texas school shooting
A look at some of the deadliest US school shootings
More TOP STORIES News