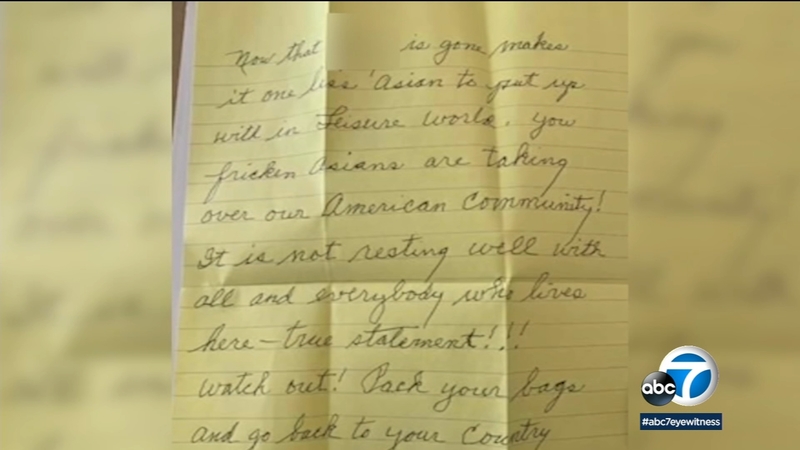 SEAL BEACH, Calif. (KABC) -- Asian-American community leaders on Thursday gathered in Orange County's Little Saigon district, where they denounced the nationwide spike in hate crimes and state Assemblywoman Janet Nguyen said she is introducing legislation that will add harsher penalties to those convicted of a hate crime.

"AB 282 will ensure those that commit misdemeanor hate crimes are held accountable for their offenses and have a criminal conviction on their record with no opportunity for it to combat this from happening in the Asian American community," Nguyen said at a news conference.

From an economic standpoint, the owner of a local nail salon said that COVID-19 has hurt his and his neighborhood businesses. With anti-Asian hate crimes on the rise, customers are afraid to venture into areas like Little Saigon to shop and eat because of concerns for their safety.

Faith Bautista, president and CEO of the National Asian American Coalition said: "This is the time to let the government know, to let the corporations know that Asians play a major role in their bottom line."

Speaking at the same podium, Claudia Choi shared the contents of an anonymous, racist letter that was sent to her mother at her home at Leisure World Seal Beach, a senior community.

Police in Seal Beach have launched a hate crime investigation into an anonymous racist letter that was sent to an Asian American resident of a local retirement community.

Hand-written on yellow notebook paper, the note arrived on the day of Claudia Choi's father's funeral.

"Now that (your husband) is gone makes it one less Asian to put up with in Leisure World," the note said. "You frickin Asians are taking over our American community!"

Choi struck a defiant tone against the hateful contents of the letter, which urged her mother to "pack your bags and go back to your country where you belong!"

"We will not 'go back to our country' -- this is our country," Choi said to applause. "We too are Americans.

"So many people have asked us, 'What can we do to help you?' First, you can come out in condemning Asian-American discrimination and intolerance," Choi added. "The jokes, the racial slurs, the threats and the violence."