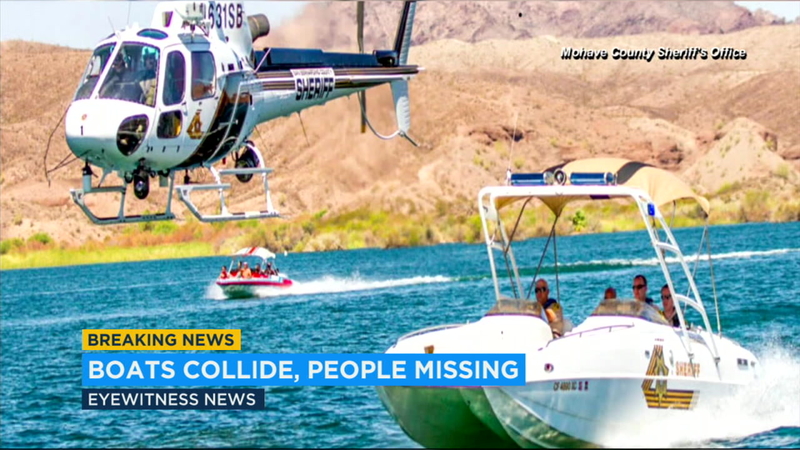 MOABI REGIONAL PARK, Calif. (KABC) -- Divers on Sunday continued to search for four people who went missing when two boats collided and sunk on the Colorado River in an area north of Lake Havasu, authorities said.

A recreational boat carrying 10 people and another vessel with six people on board collided head-on Saturday night on a well-traveled stretch of the river that marks the border between California and Arizona, the Mohave County Sheriff's Office said in a statement.

In the immediate aftermath of the impact, good Samaritans in passing boats pulled crash victims out of the water. First responders airlifted two people in critical condition to a Las Vegas hospital. Seven others were transported to local medical centers by ambulance.

@sbcountysheriff Aviation 40King6 continuing the search of the Colorado River in the air as the dive team continues underwater searches. @CORiverStation pic.twitter.com/uw3ed701LF

The crash site was between two popular marinas and near the popular Moabi Regional Park, where throngs of people were enjoying the Labor Day weekend. The river's depth ranges from shallow to 30 feet.

Despite an intense search that included overhead helicopters, the four missing persons could not be located. The search was suspended for safety reasons overnight and resumed Sunday morning.

San Bernardino County sheriff's divers were among those participating in the operation.

"We have four parties unaccounted for and presumed submerged," said Eric Sherwin, spokesman for the San Bernardino County Fire Department. "It is being treated as a recovery operation."

Sherwin said Mohave County investigators are trying to determine the cause of the crash, adding that low light conditions undoubtedly were a factor.

Anita Mortensen, a spokeswoman for the Mohave County Sheriff's Office, said none of the boaters were wearing life vests at the time of the incident.