9 injured, including 4 children, after police chase ends in multi-vehicle crash in Hawthorne 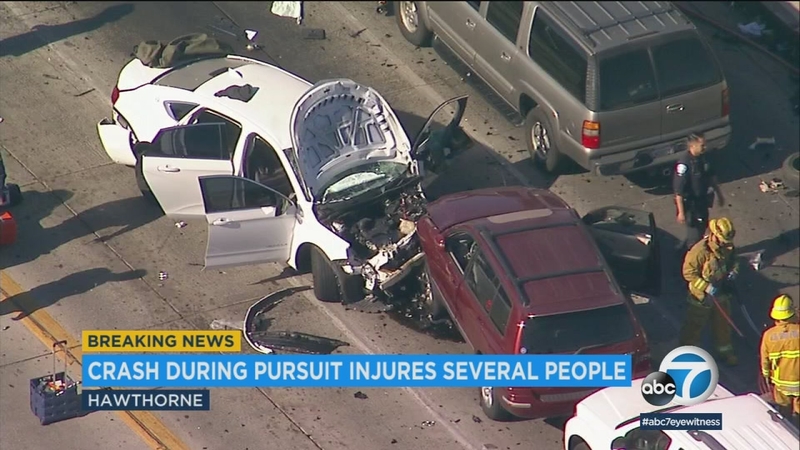 9 injured after chase ends in multi-vehicle crash in Hawthorne

HAWTHORNE, Calif. (KABC) -- Nine people were injured, including four children, after a police chase ended in a multi-vehicle crash Thursday morning at an intersection in Hawthorne, authorities said.

At least four vehicles were damaged in the collision, which happened shortly before 11 a.m. at Marine and Prairie avenues. The conditions of the injured were unknown.

Good Samaritan David Calderon captured video of the crash and also when he ran to try and help get the family out of the mangled vehicle. He said he saw two children ejected from one of the vehicles.

He told a first responder that a mother and child were trapped inside. The pair were trapped for about 15 minutes until authorities were able to get them out.

The pursuit began about 10:45 a.m. after a witness reported a burglary in progress in the 1100 block of 18th Street in nearby Manhattan Beach, a statement from that city's police department said.

At one point during the chase, two people exited the suspects' vehicle near the Hilton Garden Inn in Redondo Beach. They remained on the loose. The only description available for them was that they're two young men in black pants and hoodies.

According to the Los Angeles County Fire Department, the four injured children were transported to a trauma center following the crash. Two adults who had been trapped inside a vehicle were also hospitalized after being extricated by firefighters.

The driver of the pursued vehicle was taken into custody at the scene, police said.

The intersection was closed amid a massive response from officers and paramedics.

Prairie and Marine closed for at least 2 hours due to injury accident. End of a police pursuit