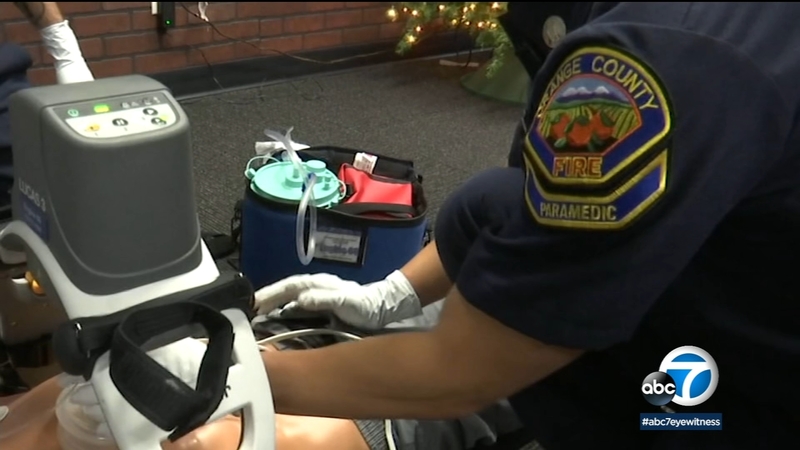 WESTMINSTER, Calif. (KABC) -- Starting New Year's Day, all agencies responding to 911 calls in Orange County will be required to carry automatic chest compression devices (ACCDs) and some first responders say these devices may increase a patient's chance of survival in an emergency.

The Orange County Health Care Agency will require ACCDs starting Jan. 1, but several departments across Orange County have already implemented use of the devices.

Capt. Tony Bommarito with the Orange County Fire Authority said the agency began training its crews on the use of ACCDs in mid-November.

"It offers the most effective and efficient chest compressions," Bommarito said.

Before ACCDs, manual chest compressions were the norm, which can be tiring and less effective.

"It takes a lot of energy to apply very effective and efficient chest compressions," Bommarito said.

This device frees up first responders to assist with other procedures or speak to a relative about their loved one's emergency.

"It is a little loud. It is a little obtrusive; however, this device is going to be giving you the most consistent, efficient and effective chest compressions, which is going to increase survivability," Bommarito said.

The device also helps once your crew is on the move with you.

"Every time that patient is moved, loaded onto a gurney, every time we defibrillate the patient, if the patient is upstairs and we're going downstairs - that's time off the chest, which decreases survivability. The longer we can keep those compressions going and keeping that oxygenated blood flow, the higher chance of survivability," Bommarito said.

The ACCD doesn't just give patients a better chance to make it, before use of the devices, there was a good chance one a rescuer was standing in the back of the ambulance, giving compressions.

Captain Brian Yau explained with the use of an ACCD, his crew members can all sit and use a safety belt during patient transport.

"We're going code three to the hospital, making left turns, stopping suddenly and we're lunging generally toward the front of the ambulance because a car has pulled up in front of us, and we have to stop quickly and it's a big danger to the EMTs, the firefighters and all of us when we can't be seat-belted," Yau said.