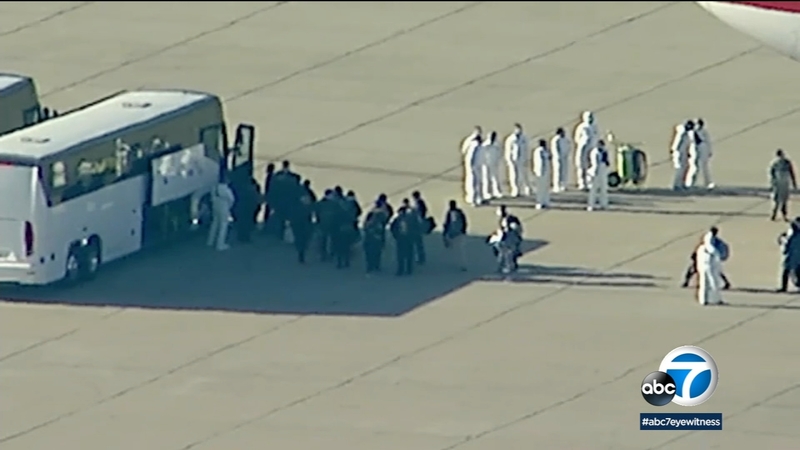 SAN DIEGO (KABC) -- The first confirmed case of novel coronavirus has been found among hundreds of people who were evacuated from China to military bases around the United States.

In the meantime, 195 evacuees who were brought to March Reserve Air Base in Riverside are scheduled to be released at the end of their 14-day quarantine on Tuesday. There were no known cases of coronavirus among that group.

Riverside County health officials urged the public to treat evacuees and employees of the base with respect. They emphasized that base employees were not in physical contact with evacuees during the quarantine period.

"We have heard your concerns about the evacuees on the base. Many of these concerns are reasonable. Unfortunately, some people with these concerns have taken them out on the families and households of people working at March Air Reserve Base. There have been comments made that have been hurtful - both in person and on social media - that are often based on incorrect or incomplete information. A few base workers have even been accosted in uniform. This is not acceptable, and needs to stop."

"Please understand that people on and off the base are not at increased risk for exposure to the new virus, and we don't restrict people who don't actually pose any risk. They have had no contact with the evacuees, whose area is fully separated from base personnel. You do not need to exclude household or family members of MARB personnel, nor do you need to require them to obtain unnecessary 'clearance letters' from a physician or health authority. They pose no greater risk than anyone else."

The Miramar group at first was also thought to be free of coronavirus. Four individuals had been isolated in a hospital after showing symptoms, but on Sunday federal health officials said they had tested negative and they were sent back to the base.

The person confirmed to have the illness arrived at Miramar last Wednesday from Wuhan. That locked-down city of 11 million is the epicenter of the highly contagious disease, which has killed more than 1,000 people overseas.