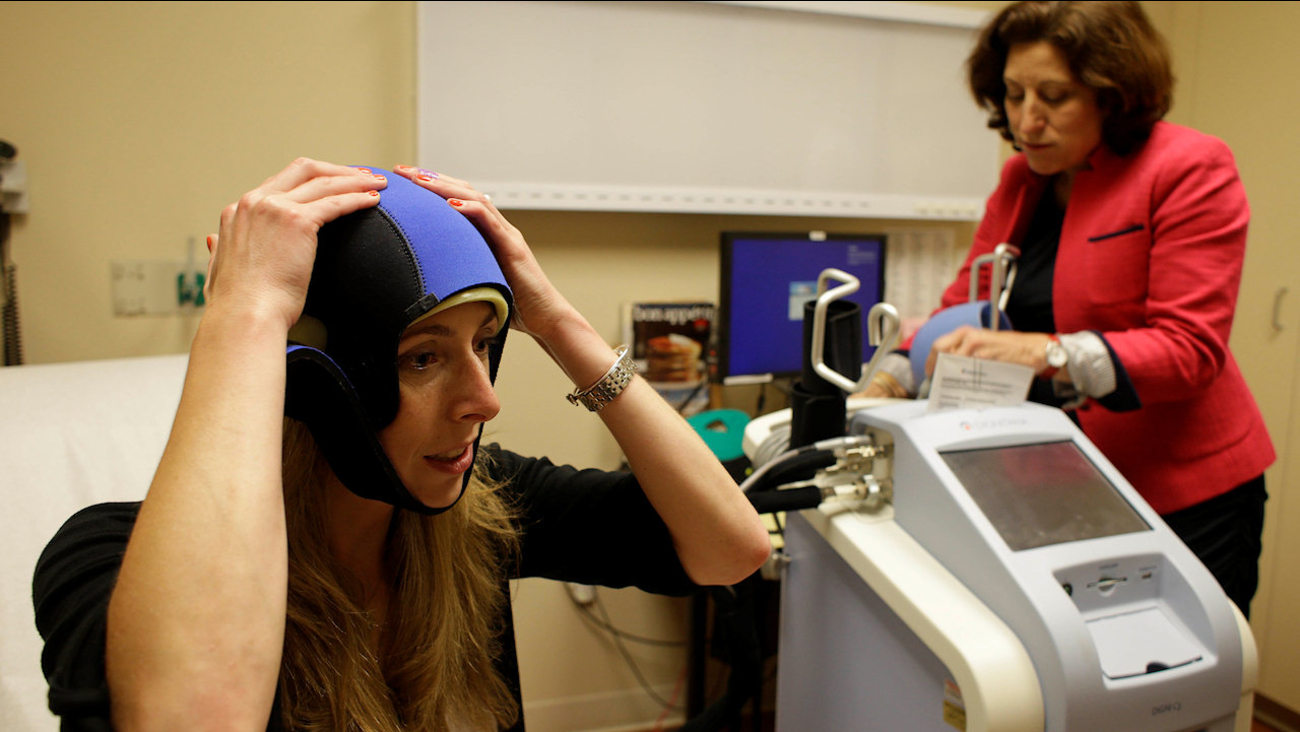 WASHINGTON -- Hair loss is one of the most despised side effects of chemotherapy, and now breast cancer patients are getting a new way to try to save their locks.

The Food and Drug Administration said Tuesday it would allow marketing of the DigniCap, a cooling system that chills patients' scalps to reduce the hair loss that is so common during breast cancer treatment.

A doctor who led research with the hair-preserving strategy welcomed the FDA's move, saying hair loss has a traumatic effect on patients, and survivors, by revealing an illness that many would prefer to keep private.

"It's such a marker for women - for work, for their families, for their children - that something's wrong with them," said Dr. Hope Rugo of the University of California, San Francisco. "You get just a few months of chemotherapy, and it takes more than a year for your hair to recover."

Scalp cooling is an idea that's been around for decades. The near-freezing temperatures are supposed to make it harder for cancer-fighting drugs to reach and harm hair follicles by temporarily reducing blood flow and cell metabolism in the scalp.

Several versions of cold caps are sold around the world. In the U.S., breast cancer patients sometimes bring collections of gel-filled caps to chemo sessions in ice chests, or store them in hospital-provided freezers, so that when one cap thaws they can don another.

But the DigniCap, made by Sweden's Dignitana AB, is the first version officially cleared by the FDA. The company will lease the device to cancer centers to use as their patients come in for chemotherapy.

How it works: A half-hour before starting a chemo session, patients strap on a tight-fitting cap that's connected to the cooling machine. It gradually chills the scalp, being careful to stay above freezing, until it's numb as the chemo infusion begins. Patients stay hooked to the cooling system during the treatment, and for about an hour and a half later as blood levels of the cancer-fighting drugs drop.

Rugo and oncologists at four other medical centers studied the DigniCap system in 122 women undergoing standard chemo regimens for early-stage breast cancer. More than two-thirds of the treated women kept more than half their hair.

"Looking healthy made me feel healthier," said Deanna King of San Francisco, who participated in the trial in late 2013 and said she retained 80 percent of her hair.

She'd been between jobs when she was diagnosed with breast cancer, and keeping her hair made it easier to restart interviews with potential employers as soon as she felt well enough.

"People are frightened of people that look sick," King said. "It made the experience a little less traumatic."

The most common side effects of the DigniCap treatment were cold-induced headaches and neck and shoulder discomfort, chills and pain associated with wearing the cooling cap for an extended period, the FDA said.

Some doctors had long wondered if the cold could prevent chemotherapy from reaching any stray cancer cells lurking in the scalp. The FDA said the risk of that happening "is extremely rare."

"Because women tend to survive early breast cancer for so many years, the FDA should provide the evidence to show if there's any long-term risk," said Dr. Len Lichtenfeld of the American Cancer Society. He said women should discuss the option with their doctors.

The cost is still being finalized but patients would be charged a fee for each DigniCap use. Depending on how many rounds of chemo a woman undergoes, the total cost could range from $1,500 to $3,000, said Dignitana chief operating officer Bill Cronin. The company is negotiating with insurance companies for coverage.
Related topics:
health & fitnessbreast cancerhairfdacancer capcancer
Copyright © 2021 by The Associated Press. All Rights Reserved.
TOP STORIES
LA to require proof of vaccination or testing for city employees
How do new CDC guidelines affect SoCal?
COVID hospitalizations in LA County hit highest level since mid-March
Gunman opens fire inside Corona movie theater, killing teen
Gov. Newsom pulls kids from summer camp with no mask requirement
CDC reverses course on indoor masks in some parts of US
Ed Buck found guilty in West Hollywood meth overdose case
Show More
Walmart will cover 100% of college tuition for its workers
Expect higher prices, fewer supplies when back-to-school shopping
CSU to require all students, staff to get COVID-19 vaccine
Arrest made in fatal shooting of Rite Aid clerk in Eagle Rock
Tenants of Caltrans-owned homes in El Sereno upset with SB51
More TOP STORIES News