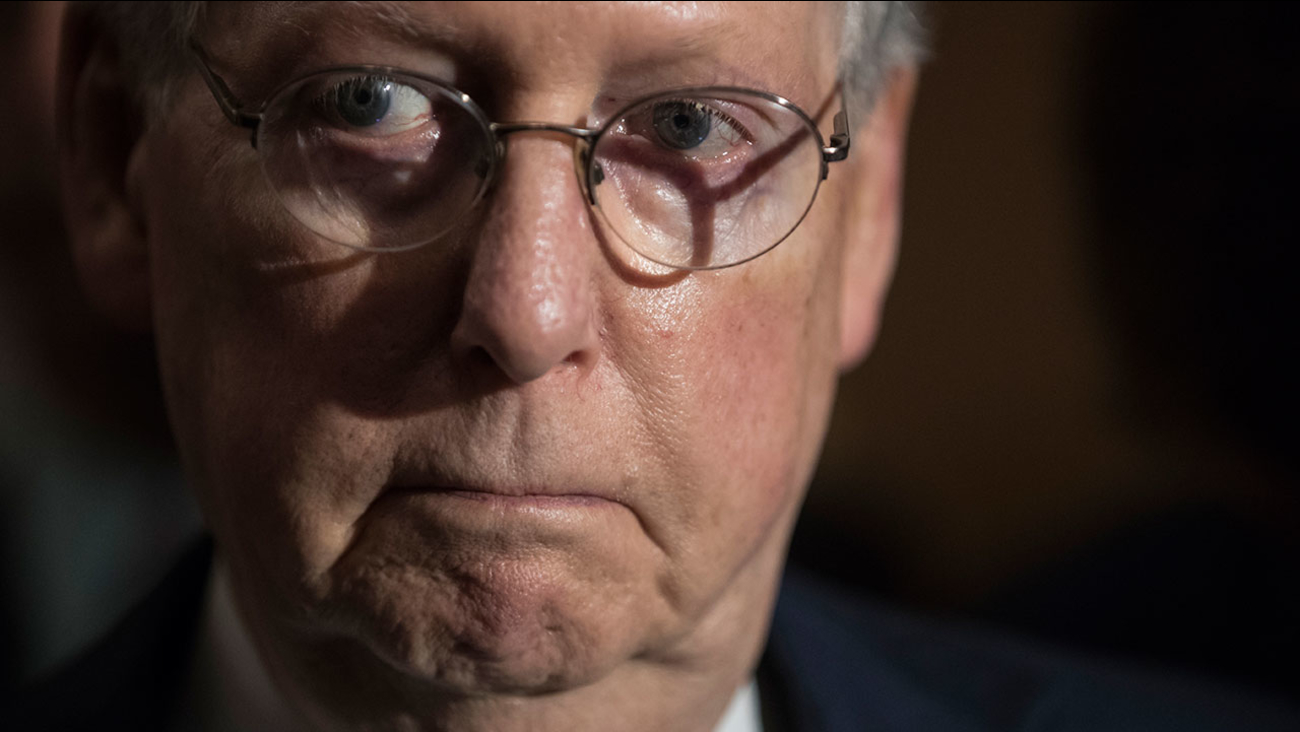 The Senate health care bill would result in 22 million more uninsured Americans over the next decade compared to current law.

That's according to an analysis Monday from the nonpartisan Congressional Budget Office.

The figure may further complicate Senate GOP leaders' plans to pass their bill this week. It's barely an improvement upon the health care bill that passed the House - which would have resulted in 23 million more uninsured.

Several GOP senators have said they want to see their bill cover more people than the House version. And President Donald Trump himself called the House bill "mean" - though he's lent his support to the Senate version and is lobbying for passage.

Republican leaders also added a penalty for people who've let their insurance lapse Monday as party leaders prepared to begin pushing the health care measure through the Senate, despite a rebellion within GOP ranks.

Under the new provision, people who've had at least a 63-day gap in coverage during the past year and then buy a policy would face a six-month delay before it takes effect. Until now, the measure that Senate Majority Leader Mitch McConnell, R-Ky., introduced last week included no language prodding healthy customers to purchase insurance.

The provision is aimed at helping insurance companies and the insurance market by discouraging healthy people from waiting to buy a policy until they get sick. Insurers need healthy customers who are inexpensive to cover to help pay the costs of people with medical conditions that are costly to treat.

The GOP bill would roll back much of President Barack Obama's health care overhaul. It pressures people to buy insurance by imposing a tax penalty on those who don't, but the Republican legislation would repeal that penalty, effectively erasing Obama's so-called individual mandate.

The House approved its version of the legislation in May. It would require insurers to boost premiums by 30 percent for those whose coverage lapsed.

McConnell is expected to offer other changes to his proposal as he seeks to nail down support for the package. He can win approval only if he limits Republican no votes to just two of the 52 GOP senators, since Democrats solidly oppose the bill. Debate should begin as early as Tuesday.

Five GOP senators - four conservatives and a moderate - have said they oppose the measure McConnell unveiled last week. Others from both ends of the party's spectrum have expressed concerns, complicating McConnell's task because edging the bill in one direction risks alienating GOP lawmakers from the other side.

None of the dissident senators have ruled out supporting the legislation if it is revised.

"They're trying to jam this thing through. It is far from a perfect bill," Sen. Ron Johnson, R-Wis., told conservative talk radio host Hugh Hewitt. Johnson called leadership's effort "a little offensive" and said conservatives had no input into the package.

McConnell drafted the plan behind closed doors after numerous meetings among GOP senators.

Moderate Sen. Dean Heller, R-Nev., has also said he's against the proposal, and several others from both wings of the party have expressed qualms. Heller faces a competitive re-election race next year.

In an opinion column in Monday's New York Times, Johnson wrote that McConnell's initial draft "doesn't appear to come close" to the goal of making coverage more affordable. He criticized the measure for increasing federal spending on subsidies for people buying coverage and not eliminating enough of Obama's regulations on insurers, including protections for consumers with pre-existing medical conditions.

The Senate legislation resembles a bill the House approved in May that the budget office said would result in 23 million additional Americans without coverage by 2026.

President Donald Trump continued his attacks on congressional Democrats on Twitter Monday, saying: "The Democrats have become nothing but OBSTRUCTIONISTS, they have no policies or ideas. All they do is delay and complain. They own ObamaCare!"

Sen. Susan Collins, R-Maine, said Sunday that seven to eight additional senators were troubled by provisions in the Senate bill, which she said could cut Medicaid for the poor even more than the House version.

Addressing reporters Sunday, the Senate's No. 2 Republican said passing a health care bill won't get any easier if Republican leaders delay a Senate vote on the GOP health care plan. Sen. John Cornyn of Texas said there is "a sense of urgency" to push forward but acknowledged the outcome is "going to be close."

The legislation would phase out extra federal money that 31 states receive for expanding Medicaid to additional low-income earners. It would also slap annual spending caps on the overall Medicaid program, which since its inception in 1965 has provided states with unlimited money to cover eligible costs.

The other three GOP conservatives who say they're against the legislations are Sens. Rand Paul of Kentucky, Mike Lee of Utah and Ted Cruz of Texas. They say the bill doesn't go far enough if repealing Obama's 2010 statute.
Report a correction or typo
Related topics:
health & fitnesswashington d.c.obamacaresenatehealth care
Copyright © 2021 by The Associated Press. All Rights Reserved.
More Videos
From CNN Newsource affiliates
TOP STORIES