Half of LA County residents 16 and over are fully vaccinated; more incentives coming 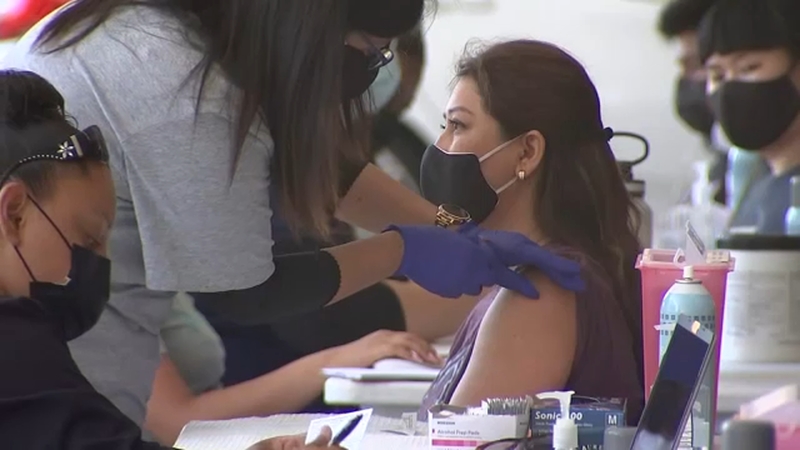 Half of LA County residents 16 and over are fully vaccinated

LOS ANGELES (KABC) -- Los Angeles County has reached an encouraging milestone in the fight against COVID-19 now that half of its population age 16 and over has been fully vaccinated, officials announced.

According to figures released Monday, nearly 4.2 million county residents have now received two doses of the vaccine and are considered fully vaccinated.

Despite that progress, health officials say lagging rates among those 30 to 49 have made them the most likely to wind up hospitalized with COVID-19 infections.

Several states have set up lottery jackpots to incentivize getting the COVID-19 vaccine. Will California do the same?

According to county Public Health Director Barbara Ferrer, between April 1 and May 15, the 30-49 age group had the highest number of people hospitalized due to COVID-19, at more than 600.

"This is the first time over the course of the pandemic that we've seen this happen," she said. "Before April, this age group consistently saw lower hospitalization rates when compared to other age groups. If we look at a different six-week period, last October pre-surge, we can see a stark difference. Even when our numbers were not at their highest, older people have always been more likely to be hospitalized."

She attributed the sudden change to a "gap in protection."

"Older adults, particularly those over 65, are now protected by their high vaccination rates," she said. "Children and young adults may be protected by virtue both of their youth and by the masking requirements in place at their schools. But people in the middle group -- many of them are workers and people responsible for the care of others -- are not as well-protected by either of these factors. And if they're not vaccinated, they are highly likely to end up with a COVID infection, and unfortunately, as we see, disproportionately likely to end up in the hospitals."

LA County is lifting restrictions on capacity at businesses June 15, but people attending large indoor gatherings like concerts and sports will need to provide proof or vaccination or a negative COVID-19 test.

Overall demand for the shots continues to dwindle, with only about 118,000 doses administered across the county population for that week that ended Friday.

In the hopes of getting more people to vaccination sites, L.A. County plans to offer more incentives, with prizes such as gift cards and sports tickets likely to be offered in coming weeks. Ferrer said the giveaways will be announced through the county's social media platforms.

People over 18 who got vaccinated over the weekend at county or city-run sites were given a chance to win Lakers season tickets.

This comes as Gov. Gavin Newsom is set to announce a plan Tuesday to incentivize getting the vaccine.

It's unclear what that will look like, but states like New York, Maryland and Ohio have announced lotteries and other cash incentives to encourage people.