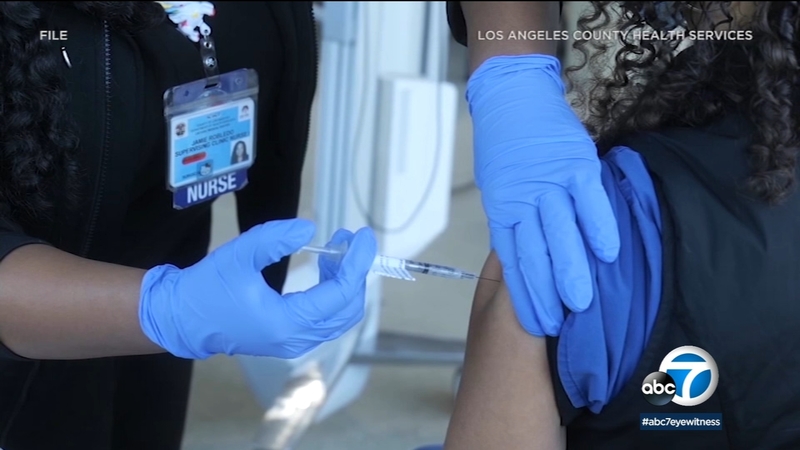 LOS ANGELES (KABC) -- Three Southern California counties now meet the thresholds for moving to the state's less-restrictive red tier, while two others could be there shortly according to new data released Tuesday.

Los Angeles, Orange and San Bernardino now all meet the range of metrics to qualify for the red tier, but need to stay there for a week before the state would let them reopen more businesses and activities.

Riverside and Ventura counties are close behind, and could also move soon depending on some additional statewide goals for vaccination that are expected to be met soon.

The state typically announces new tier assignments on Tuesday. This week, the state announced nine counties - none of them in Southern California - are now shifting to less-restrictive tiers.

To change tiers, counties have to meet several targets for metrics such as case rates per 100,000 residents, positivity rate and a health equity metric which focuses on the most disadvantaged neighborhoods.

Los Angeles County
On Tuesday, Los Angeles County's state-adjusted average rate of daily new COVID-19 cases dropped to 5.2 per 100,000 residents, well below the target of 7 cases per 100,000 to qualify for the red tier. The county was already meeting the other metrics.

The county is expected to advance after the state reaches the threshold of administering 2 million vaccine doses in hard-hit communities statewide, a total that could be reached by the end of the week.

Los Angeles County officials expect the shift to the red tier could some as soon as next week.

The county was initially anticipated to advance into the red tier later this month, with the rate of new daily COVID-19 infections expected to fall below the state-mandated threshold of 7 cases per 100,000 residents as early as Tuesday. If the county maintained that level for two weeks, it would move out of the purple tier and into the "red" tier.

The state, however, changed the thresholds for advancing through the four-tier Blueprint for a Safer Economy last week, taking into account the volume of vaccines being administered in hard-hit, lower-income communities across the state.

When that happens, advancing to the red tier will require a county to have a new case rate of 10 per 100,000 residents -- a rate L.A. County will have already met for the required two weeks. County health director Dr. Barbara Ferrer said that means the county will likely advance to "red" by the middle of next week.

Moving from the restrictive purple tier into the red tier will authorize the county to increase capacity limits at retail establishments and reopen indoor dining, fitness centers and movie theaters. However, the county is not bound by the state guidelines and could continue to impose stricter rules.

For instance, while the county currently allows outdoor dining in the purple tier, it still forbids restaurants from turning on television sets on their patios, as a way of preventing gatherings of sports fans. The state has no such restriction on restaurants.

Orange County
Orange County also meets all the requirements for a shift to the red tier, including a case rate of 6 per 100,000 residents. Its positivity rate is even stronger, meeting the standards for the orange tier

If the county can maintain those metrics through Sunday it can graduate up to the red tier, which allows for a relaxation of stay-at-home orders, by March 17.

Where is your county?

See the map below to find out where your county stands and keep reading to learn what can and can't open in each color-coded category.

Below is a full breakdown on what can and can't reopen in the red tier: