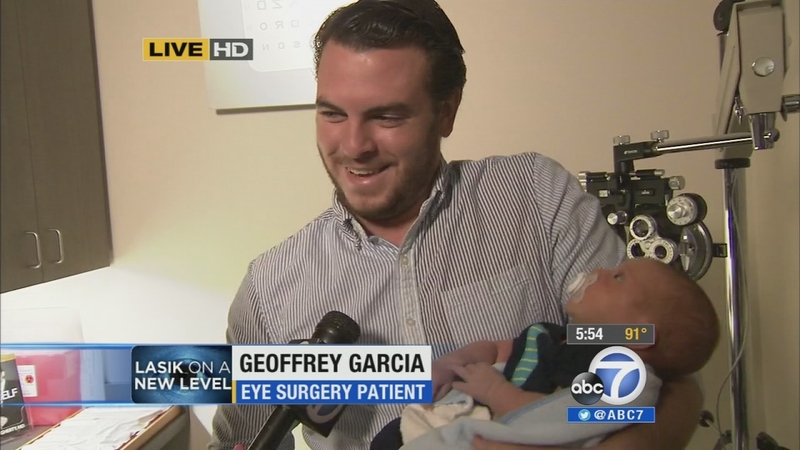 CALABASAS, Calif. (KABC) -- Since LASIK was introduced about 20 years ago, there have only been a few major improvements. Now a local doctor tells Eyewitness News there's a new technology he calls a "game-changer" that could dramatically improve vision for so many people.

Garcia, who started losing his vision clarity in 8th grade, was legally blind without glasses. He works at a country club where employees are encouraged to play golf, but he can't swing a club wearing his glasses. So, when he hits the ball he has no idea where it goes.

Watching sports on TV was impossible. And his lack of vision also made wakeboarding and snowboarding a challenge.

But Garcia has another very important reason for wanting to see clearly: He's a new dad.

"I just had my son, so him growing up and playing sports with him, I would like to do that in the future, and wearing contacts and glasses would definitely interfere with that," he said.

While he's always been interested in trying LASIK (Laser-Assisted In Situ Keratomileusis), he was worried about potential side effects, and having to get a touch-up.

So, his doctor was excited to tell him he's a good candidate for something completely brand new called CATz (Customized Aspheric Treatment zone). It uses sophisticated technology to give doctors a super-precise "road map" of his eye.

The new topography-guided technology maps the patient's cornea by measuring nearly 7,000 points of light versus the approximately 200 points measured with the typical wavefront-guided LASIK. This more precise measurement creates a map of the cornea that shows even the most subtle distortions.

Not only did the advanced procedure allow Garcia to get rid of his glasses, he even ended up with "supervision," better than 20/20, with reduced risk of glare and halos.

Garcia opened his eyes following the procedure and read an eye chart. When asked if he could see, he said, "Yeah, so much better."

He then held his infant son, able to see him clearly for the first time without glasses.