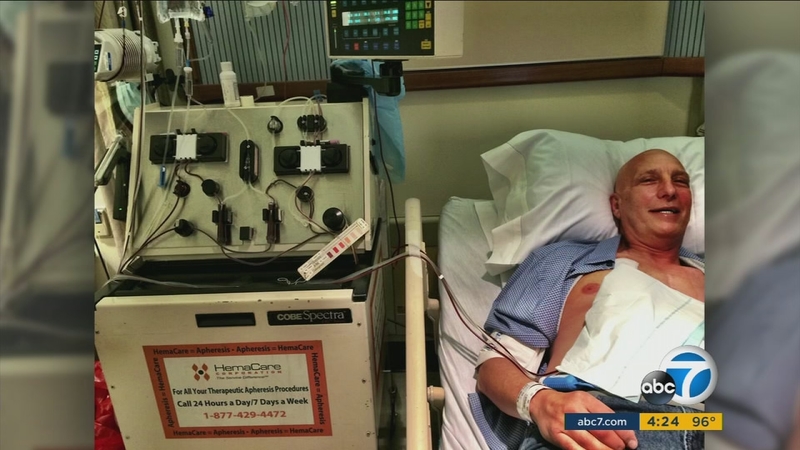 LOS ANGELES (KABC) -- The number three is lucky for Chuck Fata. His popular restaurant, Charlie's Trio, is named after his dad, grandfather and him, and it's doing well. Also, Fata has three children.

But three wasn't lucky when it came to his health. Three different times, his health has been challenged. Fata first felt acute back pain in 2014. He recalls what doctors initially saw after an MRI.

"There's tumors. I don't know what kind of cancer you have but it doesn't look good," Fata said.

The diagnosis was diffuse large B-cell lymphoma. After chemo, it reappeared. This time, it was close to Fata's stomach.

Doctors recommended an autologous bone marrow stem cell transplant. After treatment, he was so weak, he couldn't attend his daughter's graduation, so she came to him.

"They considered taking out my entire stomach, which as a restaurant owner isn't a very good thing," Fata said.

Doctors removed half of his stomach, a part of his pancreas and his spleen. A few days later, scans revealed that the cancer came back, more aggressive than ever. It spread to his lymph nodes.

He was out of options but refused to give up.

"His cancer did not respond to everything we offered and tried," said Dr. Stephen Forman, with City of Hope.

But there was one more thing to try. Forman told Fata about new research they were doing at City of Hope, called CAR-T cell therapy.

Doctors harvested his T cells, ramped them up, then sent them back into his body.

"Their sole purpose, the way we've engineered them, is to go into the body, find the cancer, bind to it and kill the cancer cell," Forman said.

After treatment, Fata suffered fevers, confusion and extreme weakness. But when doctors checked, his cancer was gone.

"I was in remission and back on the road. It was pretty incredible," a very emotional Fata recounted.

Just last week, the FDA approved CAR-T cell therapy for B-cell lymphoma patients. Fata is thrilled that it will open up treatment for so many others.