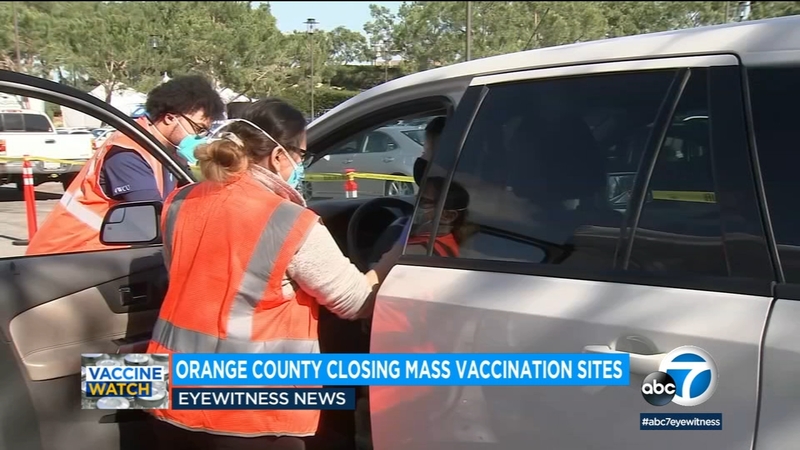 SANTA ANA, Calif. (KABC) -- Orange County officials announced on Thursday they will shut down the county's mass COVID-19 vaccination sites in June due to a lack of demand for inoculations.

Instead, the county will focus more on mobile vaccination clinics to provide shots in areas where there is more resistance to getting the jab in the arm.

The Super Point-of-Dispensing, or POD, sites at the Anaheim Convention Center, OC Fair & Event Center, Soka University and Santa Ana College will shut down on June 5.

Officials say first-dose appointments have dropped 75 percent since the end of April.

According to state data, more than 2-point-6 million vaccine doses have been administered in the county.

Orange County officials are battling back against anti-vaccine rhetoric and misinformation amid criticisms of a new app that some claim would invade their privacy.

The county meets two of the three categories for the least-restrictive yellow tier of the state's four-tier system for reopening the economy, but remained in the orange tier after the weekly rankings were released Tuesday.

Orange County's weekly average of daily new cases per 100,000 residents improved from 2.6 to 2.4. A graduation into the yellow tier requires that the case rate must get below 2 per 100,000 people. A county must maintain metrics for a tier for two weeks before graduating to a less-restrictive level.

The overall test positivity rate improved from 1.4% to 1.3%. And the county's Health Equity Quartile rate, which measures positivity in hotspots in disadvantaged communities, declined from 1.9% to 1.4%.

CVS and Walmart are joining a growing number of sites across the country that are offering COVID-19 vaccinations without an appointment.

Having trouble viewing this map? Click here to view in a new window.