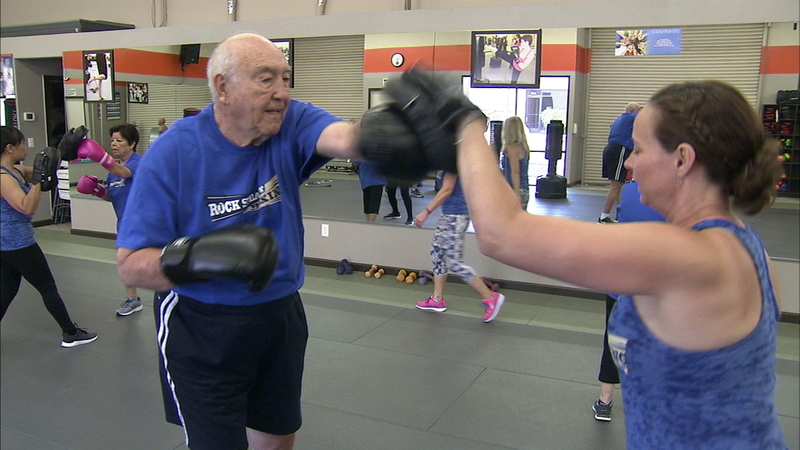 MONROVIA, Calif. (KABC) -- Parkinson's disease is a devastating disorder with no known cure, but a local gym is fighting back with a one-two punch.

"Before I came here, my hands were shaking. And now look," he said as he held his right hand perfectly still.

"My friends tell me I don't shuffle my feet anymore," he said.

Patients with Parkinson's need cardio, strength training and exercise to improve eye-hand coordination and fine motor skills, according to Lisk.

The boxing class at Kaizen Martial Arts provides all those aspects and Lisk added the combination helps rewire the disease pathways of Parkinson's.

The disease affects various neurotransmitters in the brain including a key one for movement called dopamine.

"It secretes growth factors and chemicals in the body and brain that actually changes the way the brain uses dopamine," Lisk explained.

Instructor Jody Hould described how participants work out with with weights and motions that assist in daily living.

"We make their body stronger," Hould explained. "We focus on getting down on the floor and up off the floor."

No matter what stage of Parkinson's patients are in, experts say they're going to see benefits. And the earlier a patient starts in his or her disease process, the more likely they'll see a delay in symptoms and use of medications, according to Lisk.

"So I've taken patients and just put them on exercise and they have not needed to start medication for two or three years," Lisk said.

The classes are offered three times a week at a cost of $89 per month.

"A lot of the program is about tough love and we really try to encourage them to push themselves farther than what they think they can do," Hould said.

Baca said he'd like to stick with the treatment for the rest of his life.

"This program has just solved all my problems," he said smiling.