KABC
By Jade Hernandez
COMPTON, Calif. (KABC) -- Residents took their frustration out about the murky water they have in their community during a town hall meeting held by a congress woman Wednesday night.

In a video taken by one resident, the water in Willowbrook comes out rust colored. It's an area of Los Angeles County that's serviced by the Sativa Water District.

Just a few blocks away, the water is cloudy inside another home. The neighbor said she never knows when it will turn brown or murky.

"The water quality has decreased from good to bad and it's been maybe about six or seven months?" Compton resident Martha Barajas said.

Martha Barajas took out her grievances at the meeting set up by Congresswoman Nanette Diaz Barragan.

The congress woman brought together health and environmental experts as well as a Sativa Water District spokeswoman, but no one from the district's board.

The water district serves about a half square mile and has about 1,600 customers. Many of those customers were not happy last Tuesday when a district spokeswoman tried to explain the discoloration comes from pipes after they're flushed out. She said the sediment and rust leak into the water.

The packed meeting, state water board spokeswoman Miryam Barajas said, included residents she began collecting water from for testing, which is what the state water board did when the complaints came pouring in.

"It was found that the water is safe, but nobody wants to drink brown water," she said.

A suggested option to clear up the problem is to replace the aging infrastructure. Martha Barajas started a petition and mobilized neighbors.

The congress woman instructed anyone who sees brown water to report it. She scheduled another town hall meeting.

As for other Compton residents who aren't within the water district's service area, they said they've seen brown water for years yet no one has listened to them.
Report a correction or typo
Related topics:
health & fitnesscomptonwillowbrooklos angeles countywatercontaminated waterdrinking water
Copyright © 2020 KABC-TV. All Rights Reserved.
RELATED 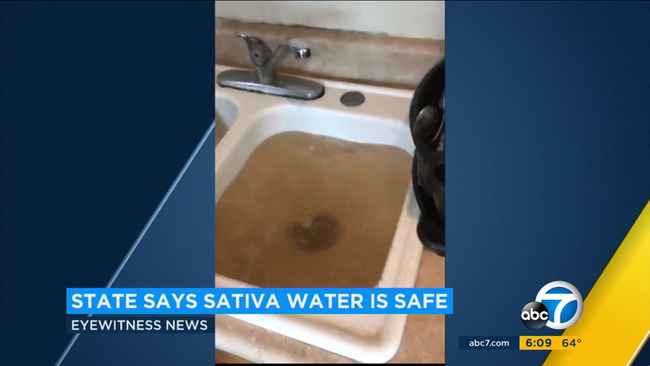