Remdesivir reduces recovery time by 31%, the NIH-led study found
AP
By Marilynn Machione
For the first time, a major study suggests that an experimental drug works against the new coronavirus, and U.S. government officials said Wednesday that they would work to make it available to appropriate patients as quickly as possible.

In a study of 1,063 patients sick enough to be hospitalized, Gilead Sciences's remdesivir shortened the time to recovery by 31% - 11 days on average versus 15 days for those just given usual care, officials said. The drug also might be reducing deaths, although that's not certain from the partial results revealed so far.

"What it has proven is that a drug can block this virus," the National Institutes of Health's Dr. Anthony Fauci said.

"This will be the standard of care," and any other potential treatments will now have to be tested against or in combination with remdesivir, he said.

A possible treatment for the coronavirus that set off a rally on Wall Street powerful enough to override data showing the U.S. economy had logged its worst quarterly performance since 2009.

Dr. Aneeesh Mehta, of Emory University Medical School, said he wants Americans to know that the country has its first glimmer of hope in the fight against COVID-19.

No drugs are approved now for treating the coronavirus, which has killed about 226,000 people worldwide since it emerged late last year in China. An effective treatment for COVID-19 could have a profound effect on the pandemic's impact, especially because a vaccine is likely to be a year or more away.

Fauci revealed the results while speaking from the White House. Remdesivir was being evaluated in at least seven major studies, but this one, led by the NIH, was the strictest test. Independent monitors notified study leaders just days ago that the drug was working, so it was no longer ethical to continue with a placebo group.

Dr. Elizabeth Hohmann, who enrolled 49 patients in the experiment at Massachusetts General Hospital, said study leaders were told Tuesday night that the results are based on "the first cut of 460 patients."

"There's over 1,000 in the study so there's a lot more information to come" and full results need to be seen, she said. "I'm cautiously optimistic."

"For the first time we have a large, well-conducted trial" showing a treatment helps, he said. "This is not a miracle drug ... but it's definitely better than anything we have."

Fauci said the partial results showed that the drug had "a clear-cut significant positive effect," shortening the time to hospital discharge by four days. By comparison, antiviral drugs for the flu shorten illness by about one day on average and only when started within a day or two of symptoms first appearing.

In the remdesivir study, about 8% of those on the drug died versus 11.6% of the comparison group, but the difference is not large enough for scientists to say the drug was the reason.

No information was given on side effects. Fauci said full results would be published in a medical journal soon. He said final numbers might change a bit but that the study's overall conclusion would not.

Remdesivir is among dozens of treatments being tried against the coronavirus but was the farthest along in testing. It's given through an IV and blocks an enzyme the virus uses to copy its genetic material. In animal tests against SARS and MERS, diseases caused by similar coronaviruses, the drug helped prevent infection and reduced the severity of symptoms when given early enough in the course of illness.

"We are excited and optimistic" about the new results, said Vanderbilt University's Dr. Mark Denison. His lab first tested remdesivir against other coronaviruses in 2013 and has done much research on it since, but was not involved in the NIH study.

"It's active against every coronavirus that we've ever tested," Denison said. "It was very hard for the virus to develop resistance to remdesivir. That means the drug would likely be effective over longer term use."

The NIH study started in February; the first participant was a patient in Nebraska who had been evacuated from the Diamond Princess cruise ship docked in Japan. It quickly enrolled its original goal of 440 patients and then was expanded to give more answers on questions such as which subgroups may or may not benefit, and other factors that may affect success, such as how early the drug was given.

The study only tested the drug in patients sick enough to be hospitalized - typically with pneumonia and often needing oxygen - so its safety and effectiveness for people less ill isn't known.

The study will continue to enroll new patients. It was set up as an umbrella trial to test many treatments, although they now will have to be tested against remdesivir or with it, Fauci said.

Separately on Wednesday, California-based Gilead announced partial results from its own ongoing study of the drug in severely ill, hospitalized COVID-19 patients. The company said patients treated for five days "achieved similar improvement" in health as others treated for 10 days. However, that result is hard to interpret because there is no comparison group of people getting usual care, so it's impossible to know how much patients would have improved on their own.

Yet another study tested remdesivir in severely ill patients in China, which was stopped after only 237 of a planned 453 patients were enrolled. Partial results published Wednesday in the British medical journal Lancet suggest the drug did not speed recovery in that study, but it was too small to be definitive, Fauci and study leaders said.

Gilead also is testing remdesivir in a separate study of moderately ill coronavirus patients. No results have yet been announced from that study, which does have a comparison group.

Besides these studies, Gilead also has given remdesivir to more than 1,700 patients on a case-by-case emergency basis. The drug is not yet approved anywhere in the world for any use.

A statement from the Food and Drug Administration says that the agency has been talking with Gilead "regarding making remdesivir available to patients as quickly as possible, as appropriate."

Gilead said it was ramping up production and aims to have more than 140,000 treatment courses by the end of May, more than 500,000 by October and more than 1 million by December.
Report a correction or typo
Related topics:
health & fitnesscoronavirusdrugu.s. & world
Copyright © 2020 by The Associated Press. All Rights Reserved.
CORONAVIRUS 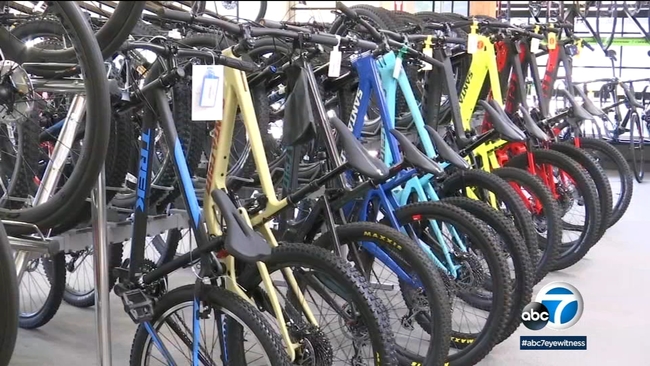 Bike riding in SoCal is the unofficial sport of quarantine