The dangerously hot temperatures have prompted the manager of California's power grid to issue a Flex Alert that will be in effect from 3 to 10 p.m. Thursday.
KABC
By Marc Cota-Robles 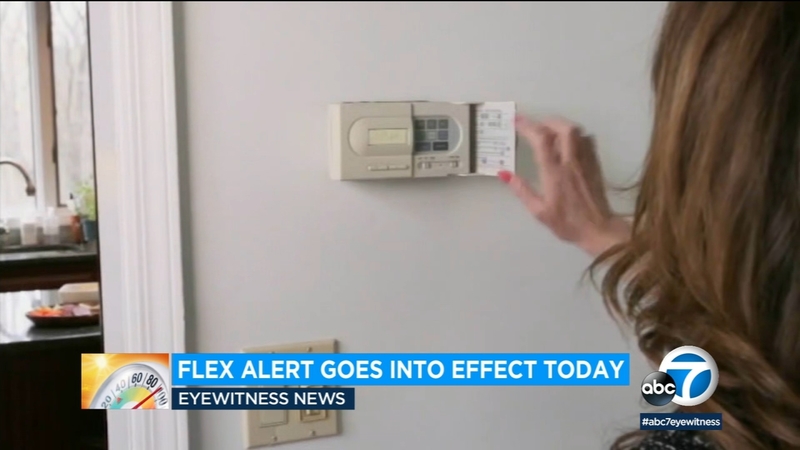 The dangerously hot temperatures have prompted the manager of California's power grid to issue a Flex Alert that will be in effect from 3 to 10 p.m. Thursday.

The alert, issued by the California Independent System Operator, urges residents to conserve energy wherever possible to reduce strain on the grid and prevent possible rolling blackouts.

Temperatures that will be high enough to cause people to become ill, with several Los Angeles and Orange County cities forecast to reach triple-digit territory, will plague the Southland through Friday, according to the National Weather Service.

A heat advisory went into effect at 8 p.m. Wednesday, when an even more serious excessive heat warning expired, and will remain in force through 8 p.m. Friday in the San Gabriel and Santa Monica Mountains, the San Fernando, Santa Clarita and San Gabriel valleys, the L.A coastal zone comprising such beach cities as Malibu, Long Beach and Santa Monica, plus Beverly Hills, metropolitan Los Angeles, Hollywood and the Hollywood Hills, and inland Orange County.

"Hot temperatures may cause heat illnesses to occur,'' warned an NWS statement. "Drink plenty of fluids, stay in an air-conditioned room, stay out of the sun, and check up on relatives and neighbors.''

The NWS added that children, seniors and pets must never be left in vehicles parked in the heat, even with windows open, as interior vehicle temperatures can quickly turn lethal.

The weather service also warned of an elevated critical fire danger through Friday because of high heat and low humidity, but no red flag warning was in force south of Ventura County's Los Padres National Forest.

Friday's highs will be as much as 10 degrees cooler in some communities, but the same as Thursday's in others.

Sunny skies were also forecast in Orange County, along highs of 85 in San Clemente; 86 in Newport Beach and on Santiago Peak; 88 in Laguna Beach; 96 on Ortega Highway at 2,600 feet; 98 at Fremont Canyon; 100 in Irvine and Yorba Linda; 102 in Mission Viejo; 103 in Anaheim; and 105 in Fullerton. Friday's highs will be only slightly lower and climb down some more over succeeding days, beginning to hit the 80s on Sunday.