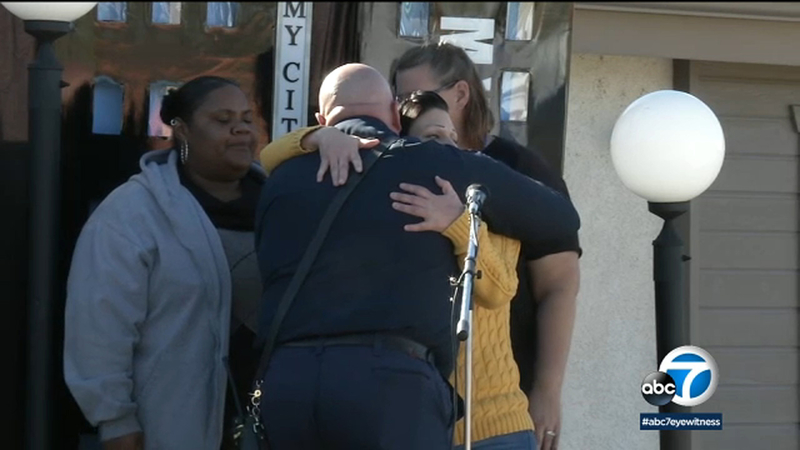 Hemet woman thanks community after apartment fire that killed 4

HEMET, Calif. (KABC) -- Firefighters lined up Tuesday to hug a Hemet mother who lost her husband and three of their kids after their apartment went up in flames likely sparked by a Christmas tree.

"Thank you guys for all your love and your support and all your wonderful hugs," said Christina McCraw Moreno, who escaped the blaze with two of her daughters.

Her husband, 41-year-old Juan Moreno, initially escaped the apartment fire with them but when he realized the others were still inside, he rushed back into the burning unit to try and rescue two of his daughters who were still trapped. He never made it back out.

The girls were identified by relatives as 12-year-old Maria and 4-year-old Janessa. The family's 8-year-old son later died from his injuries, according to a GoFundMe page set up to pay for the family's funeral expenses.

"Pretty much every firefighter has children and everybody would do the same. Everyone would do the exact same thing that he did," said Battalion Chief Jamie Majchrzak with the Hemet Fire Department.

An 8-year-old boy died Saturday from injuries he suffered in a Hemet apartment fire that killed his father and two sisters.

On Tuesday, the My City Youth Center was full of family, friends, and even strangers who just wanted to show support.

"I'm thankful too that she's here and they've stood on stage and felt comfortable to talk and got to meet the firefighters. She's a brave, but broken woman right now," said Erika London, who does community relations with My City Youth Center, which is located just a couple of blocks from the family's apartment.

"As devastating and as horrific as it is, to see the community show up here and embrace each other, the pastors from the different churches, just people in general showing up to mourn together, is fantastic," said Dan Harris, the Executive Director of My City Youth Center.

"So many lives are affected, so gathering today has been important for our community to heal," added Hemet City councilmember Karlee Meyer.

Despite tragedy, Christina was able to stand in front of a crowd with a grateful heart.