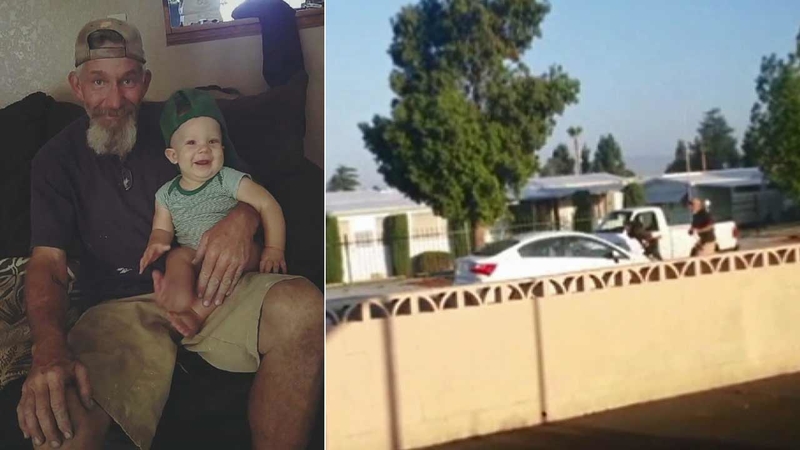 HEMET, Calif. (KABC) -- When Angelica Parra began rolling on a confrontation outside her Hemet home Friday morning, she had no idea what she was about to capture.

"It was through this window. I just saw two people arguing and then I went back to the table where I had my phone, and then I grabbed my phone and I just started recording," she said.

According to Hemet police, the victim, identified by his family as Tracy Leavitt, had his car stolen and was confronting the alleged car thief's friend.

Moments later, police say Leavitt was hit by the suspected car thief with his own car. In video obtained by the Hemet Police Department, the second suspect is heard cheering.

Leavitt's son spoke to Eyewitness News off-camera Tuesday and said his father confronted the two men after they threw a soda into his car. He pulled over and that's when one of the suspects stole his car.

During the heated argument, Leavitt smashed the rear cab window of the truck with the suspect's skateboard. After hitting Leavitt, the two suspects abandoned the victim's car and fled the scene in a white 2006-2011 standard cab Ford pickup truck.

Amazingly, Leavitt survived and was transported to a local hospital with non-life threatening injuries. He suffered a collapsed lung, multiple broken bones and now needs hip and knee replacement surgery.

Leavitt's family has set up a GoFundMe account to help pay for his medical costs. You can donate here: www.gofundme.com/b35wutb3u5w.

Meanwhile, Parra says she tried to help Leavitt, but knew not to move him.

The two suspects remain outstanding, according to the Hemet Police Department.

The first suspect was described as a Hispanic or white man, between 18 and 25 years old, approximately 5 feet 10 inches tall, weighing 140 pounds, with a thin build and brown hair. He was last seen wearing blue jeans, a black shirt and a black baseball-style hat.

The second suspect was described as a Hispanic or white man, between 18 and 25 years old, approximately 5 feet 8 inches tall, weighing 130 pounds, with a thin build and brown hair. He was last seen wearing black jeans, a white short-sleeve shirt and a black and white baseball-style hat backwards.

Investigators believe the suspects' Ford pickup truck may have a broken rear cab window, in addition to a broken driver's side window.