Catalytic converter thefts on the rise in Los Angeles, police say. Here's why 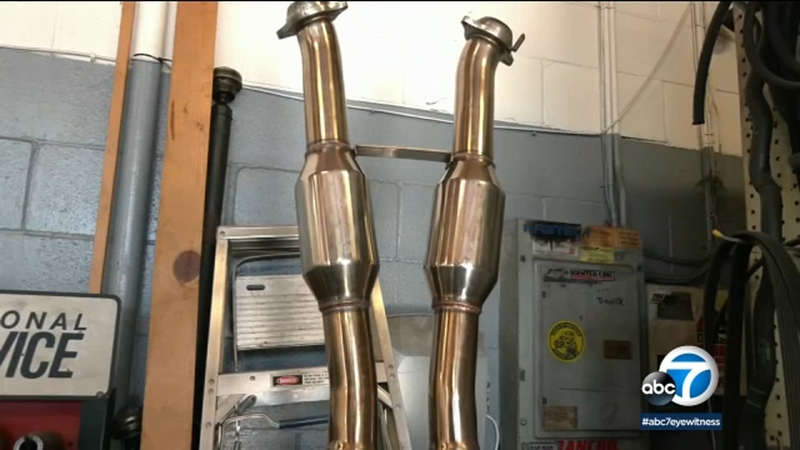 LOS ANGELES (KABC) -- Catalytic converters have become a hot commodity for thieves, according to the Los Angeles Police Department.

Even though car burglaries are down in the city of Los Angeles, the LAPD says some of those burglars are for the catalytic converters.

Jessica Rodriguez and Tracy Tucker drive for "Meals on Wheels" for the senior center in Wilmington. One of their personal cars and the van used to deliver meals were recently hit.

"I got up in the morning to start up my vehicle, and I already knew what it was because it happened before, you know, it was loud with no muffler. I looked under and seen the catalytic converter was missing." Tuckers said.

"It was devastating. Then you hear about the cost, and that just takes another blow, when you're just trying to truly make it with rent, bills and feeding teenagers," Rodriguez said.

The number of vehicles on the road with a rolled-back odometer increased by 13% this year, CARFAX says.

So why are these a target for thieves? They want what's inside.

Capt. Eric Buschow with the Ventura County Sheriffs Office says two-three man crews are going through neighborhoods to crawl under vehicles in the middle of the night to saw off catalytic converters. They can't unbolt or detach, so the thieves have to use power tools to get it.

Buschow says the department has made arrests in some of the 230 reported catalytic converter thefts from last year. The crews, he says, come up from Los Angeles looking for cars to hit.

The department is now working with a number of auto repair and oil change locations to etch your license plate number and paint a sheriff's star on your catalytic converter for free.

To prevent such thefts, you can put your car in a garage, if that's an option. Also, be aware of any suspicious activity going on in your neighborhood.
Report a correction or typo
Related topics:
los angeleslos angeles countyventura countyburglarytheftcrimecarsautomotive
Copyright © 2021 KABC-TV. All Rights Reserved.
More Videos
From CNN Newsource affiliates
TOP STORIES