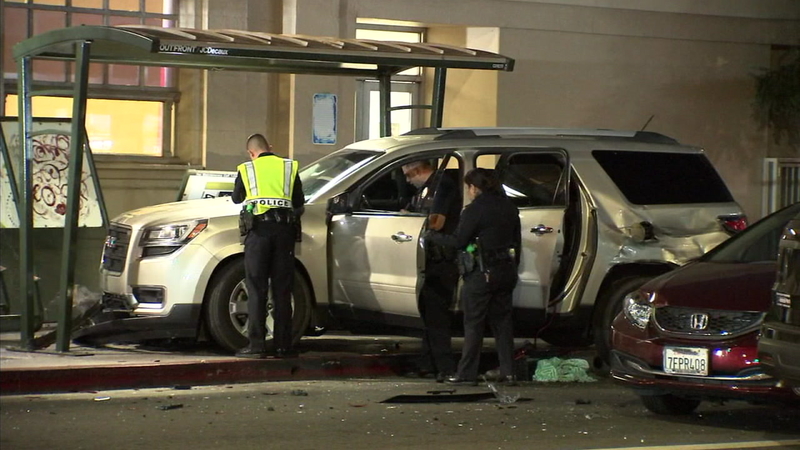 LOS ANGELES (KABC) -- Two robbery suspects led police on a high-speed chase from the Highland Park area through Los Angeles and Glendale, weaving in and out of traffic and narrowly avoiding collisions with other cars and pedestrians.

The chase ended as the suspect's vehicle crashed into a bus stop booth in Echo Park, where they fled on foot and were chased down by officers.

Police took two robbery suspects into custody after a chase through downtown LA that ended in an Echo Park crash.

The chase lasted more than an hour, starting Tuesday afternoon in the Highland Park area after reports of a robbery at an auto parts shop. Detective Meghan Aguilar said the owners of the business flagged down a police unit to report the crime.

The robbery suspects in an SUV led police onto the 210 Freeway and then the 2, then pulled onto surface streets in the Glendale area.

They weaved in and out of surface traffic, narrowly missing cars and then jumped back onto the 2 Freeway briefly, before returning to surface streets in neighborhoods near Dodger Stadium and the LAPD academy.

#VIDEO: One of the suspects being taken to the hospital @ABC7 pic.twitter.com/xqeh2I262b

At times they hit speeds of 70-85 mph on surface streets, switching onto the wrong-direction lanes, running red lights and narrowly missing pedestrians and bicyclists.

They continued to pull onto and off nearby freeways and flee on surface streets in the downtown LA area. They were also seen throwing items that appeared to be clothing out the back window of the SUV.

Two robbery suspects led police on a high-speed chase from the Highland Park area through LA, weaving in and out of traffic and narrowly avoiding collisions with other cars and pedestrians.

At one point, they were nearly boxed in by surface-street traffic downtown, but a truck blocking them slowly moved out of the way and let the chase continue, as pedestrians scattered on the sidewalk.

It was unknown if the suspects were armed.

After nearly 40 minutes of circling around downtown LA streets, the suspects jumped onto the northbound 101 Freeway, where they hit 90 mph in unusually light traffic, and then exited to Echo Park.

Shortly after leaving the freeway, they appeared to lose control of the vehicle and skidded out, slamming into a bus stop booth. Authorities said a pregnant woman was driving the vehicle they clipped before the crash, but said she was OK.

Two suspects then exited the vehicle and fled on foot. One briefly tried to jump into another car, but was unsuccessful.

Officers on foot chased them down and arrested them. Multiple officers were seen swarming one suspect, tackling him as he appeared to resist and finally taking him into custody.

Witness Kevin Menendez said the suspect fought back during his arrest.

"With the adrenaline rushing, he was just trying to break free. I think he was screaming out some profanity. But it just sounds like he didn't just want to go down," he said.