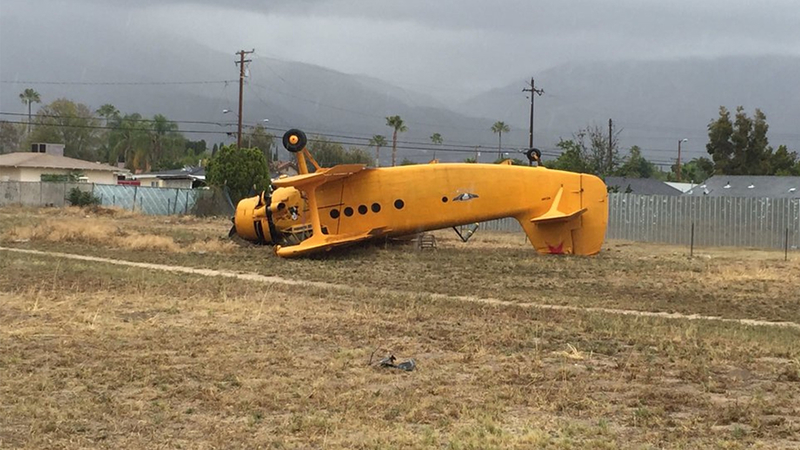 The crash was reported near Cypress Street and Lankershim Avenue around 10 a.m.

"The plane was already upside down and they hit the ground," witness Jennifer Sifford said. "I jumped the brick wall to run to come to them and pulled them both out, and they were OK. Thank God, they were fine."

CalFire county chief Mike Mohler says the pilot and a passenger exited the mustard-colored plane dubbed the "Big Panda-Monium" with no major injuries.

According to the Federal Aviation Administration, the single-engine Antonov AN-2 experienced engine failure as it was approaching San Bernardino International Airport.

"They tried to land at the base and they couldn't. They hit the poles," Sifford said.

The plane's landing gear was torn after it snagged a power line on its way down, knocking out electricity to the neighborhood surrounding the vacant lot.

Residents credit the pilot for ditching the plane in a safe location less than a block away from an elementary school.

"It could have been worse. If the plane probably shut down five minutes earlier, it would have definitely went into homes. We would have been looking at a way different picture," witness William Lair said.