Teacher falls during Eaton Canyon hike, impales herself with pencil 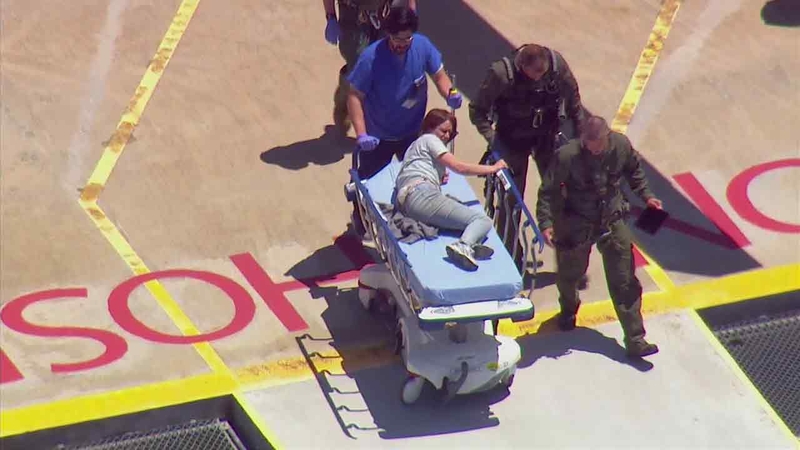 Woman falls during Eaton Canyon hike, impales herself with pencil

ALTADENA, Calif. (KABC) -- A woman hiking at Eaton Canyon was being rescued after she slipped and fell near a waterfall and impaled herself with a pencil Monday afternoon.

Crews from the Altadena Sheriff's Station and the Los Angeles County Fire Department responded to a report of a woman falling from rocks and landing on a pencil that was protruding from her lower back.

The incident was reported in the 2200 block of Pinecrest Drive in the Angeles National Forest, just above Altadena and Pasadena.

The 35-year-old, who was one of two teachers leading children on a hike to the waterfall, was climbing over some rocks when she slipped and fell on her back, resulting in the pencil becoming lodged inside of her, officials said.

The pencil was in her backpack when it injured her approximately a 1/2 inch from her spine and cut three inches deep in the woman's lumbar area, according to sheriff's officials.

The teacher was hoisted and flown to Huntington Memorial Hospital for treatment. She was expected to be OK.

"She was on trail. She was where she's supposed to be, it's just that area is a bit hazardous," said a spokesperson of the L.A. County Fire Department.

The fall was just the latest in a string of incidents in the dangerous canyon near the waterfalls, which is now off limits to the public because of deaths and dozens of rescues in recent accidents.

Just before the closure in 2014, a woman lost her footing and slid down a rocky area, all before slamming into a tree. Earlier this year, a 24-year-old man also plummeted 40 feet near the waterfall trail.

Hikers familiar with the area said safety is the first priority when exploring the area.

"It's definitely dangerous if you don't know the terrain, and you don't know what you're doing," said hiker Raffi Parseghian. "This is decomposing granite, so it's going to just fall apart. If you think you can climb any part of this, you're wrong."