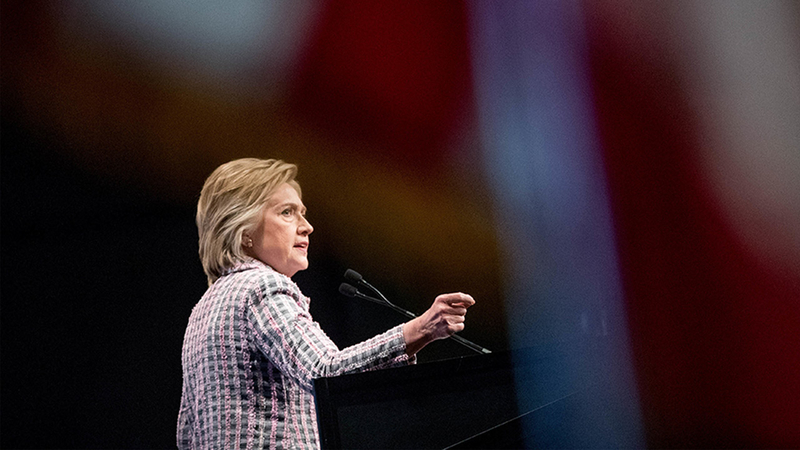 The former first lady, New York senator and secretary of state claimed the Democratic Party's nomination over Vermont Sen. Bernie Sanders, who asked Democrats to nominate her by acclamation.

Delegates cheered as Sanders helped to make it official as his home state of Vermont was called upon during Tuesday's roll call on the second day of the Democratic National Convention.

"Madam chair, I move that the convention suspend the procedural rules. I move that all votes, all votes cast by delegates, be reflected in the official record, and I move that Hillary Clinton be selected as the nominee of the Democratic Party for president of the United States," Sanders declared, asking that it be by acclamation.

Sanders had urged his delegates Tuesday morning to vote for him during the roll call.

"So tonight for those of you who are supporters, you're going to have a roll call vote, and I very much look forward to and appreciate your support. Let's get the 1,900," Sanders said during a breakfast meeting of California delegates. "I think we're going to register somewhere around 1,900 votes tonight. That's pretty damn good. We should be proud of that."

Sanders acknowledged he did not have enough support to prevent Clinton from being formally nominated by the Democratic Party for president.

Watch as Sarah Silverman tells Bernie Sanders fans that they're being "ridiculous."

Gov. Jerry Brown made the announcement for California delegates, as they voted in favor of Clinton by a margin of 330 to 221.

Both Clinton's and Sanders' names were placed into nomination for president at the DNC, largely a symbolic gesture for Sanders supporters.

Every state was called upon alphabetically and a selected delegate or official from each state spoke before announcing how the state's delegate vote would be allocated.

Clinton secured the 2,382 total delegates needed to put her "over the top."

So proud of you, Hillary. #DemsInPhilly

The nomination pits her against Republican presidential nominee Donald Trump, with the two battling it out for the November election to see who claims the White House.

Shortly after Clinton officially claimed the nomination, a group of Sanders' supporters exited the convention for a peaceful sit-in at a nearby tent for journalists.
EMBED More News Videos

"It's for the betterment of our children and the future of our children," 64-year-old protester Talat Khan of San Bernardino said during the sit-in outside the Wells Fargo Center.

Tuesday's outcome was in stark contrast to 2008, when Clinton lost to then-Sen. Barack Obama. During the proceedings, Clinton moved to stop the roll call and nominate President Obama by acclamation.

After that, it took just a moment and a quick "aye" vote for him to officially be the nominee of the Democratic Party.