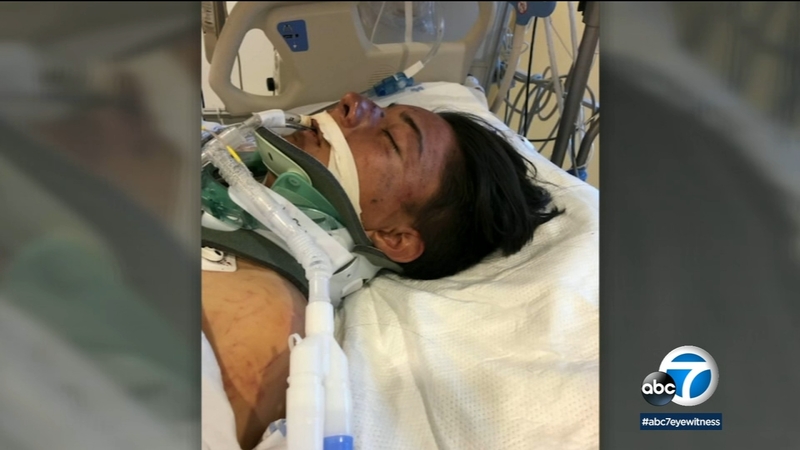 SOUTH LOS ANGELES (KABC) -- Police say a teen was struck by a car and dragged 1,500 feet after the hit-and-run driver allegedly blew through a stop sign in South Los Angeles.

Roberto Diaz had just bought a soda at a nearby store when he was hit while riding his bicycle through a crosswalk in the area of Maple Avenue and 37th Street around 9 p.m. Tuesday, according to Los Angeles police.

Surveillance video at a store on Martin Luther King Jr. Boulevard captured the moment the 15-year-old dislodged from the vehicle. Witnesses saw Diaz's bike flying into the air.

The driver was chased by good Samaritans but was able to flee the scene, authorities say.

Diaz was transported to the hospital, where he was in intensive care as of Wednesday morning. Officers at the scene described the horrific incident as one of the worst hit-and-run crashes they've seen in years.

"His whole leg was just pure bones, no skin at all. His foot was just like all dislocated," one witness said.

The victim's mother, Belen Garcia, plead with the suspect to come forward, asking how someone could leave her son in the street to die.

A $25,000 reward is being offered for information leading to an arrest.