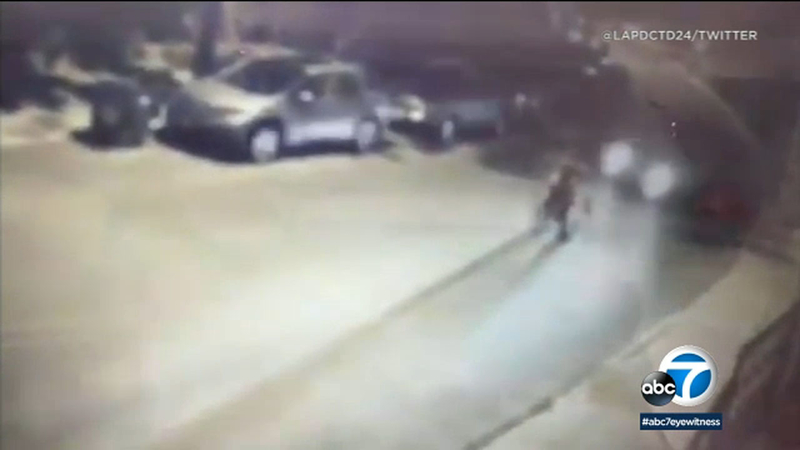 SILVER LAKE, LOS ANGELES (KABC) -- A bicyclist was severely injured after being hit in a violent head-on crash which was caught on surveillance video in Silver Lake. Now, authorities are hoping it will help them find the driver who fled from the scene.

The crash happened late Friday night on the 3000 block of Berkeley Avenue, according to the Los Angeles Police Department.

The footage shows the 57-year-old victim, who investigators said is a homeless man who lives in the area, stop in the street when he sees oncoming headlights. He survived the crash and is expected to make a full recovery, but the car never slowed down.

"You know, somebody's driving and (they) land on the hood and windshield... obviously he knew he hit something and decided to keep going," said Detective Juan Campos.

Authorities said all the driver had to do was stop and call 911. Instead, the driver is now wanted for felony hit and run. They believe the suspect may also live in the area.

The suspect vehicle is described as a newer model red Mini Cooper with a white roof, which investigators say will likely have extensive damage to the front of the car and possible the windshield.

Residents of the area said drivers have to be extremely cautious when driving on the narrow and steep streets of Silver Lake.

"I notice it all the time because I'll come down this way and there will be pedestrians coming this way, and you have to go slow. Some people you see coming fast... because they're just trying to make their turn but there's not really good visibility," said David Rosen.