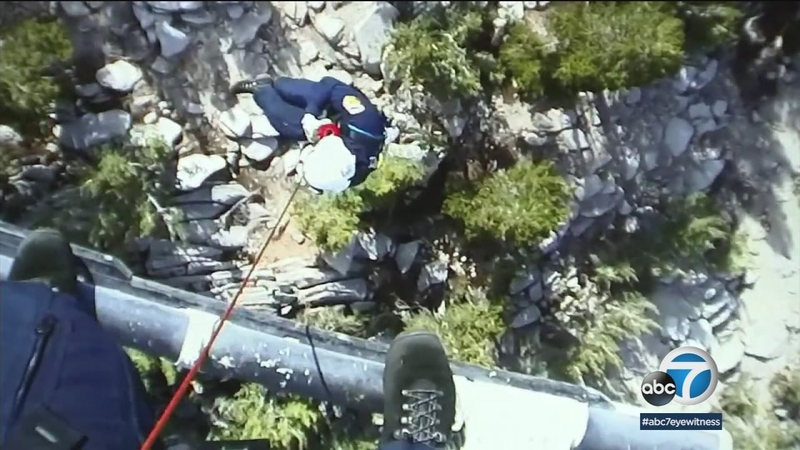 Hemet rescue at 10,700 feet was first for firefighters

HEMET, Calif. (KABC) -- At Hemet-Ryan Helitack Base in Riverside County, Cal Fire firefighters are trained to respond to fires with a variety of aircraft.

But on Sunday afternoon, they got a different type of call.

"Sometime after lunch, we a call to assist in a rescue of an injured hiker up at San Jacinto Peak," Cal Fire helicopter pilot George Karcher said.

Hoist rescues are part of the job for Cal Fire firefighters, but what made Sunday's different was its dizzying altitude.

"The riskiest thing we can do with the aircraft is a hoist recuse, let alone at 10,700 feet with thunder storms and two converging air masses," Battalion Chief Justin McGough said.

Before lifting off, the crew needed to drop some weight to counter weather conditions.

"In order to do a rescue at 10,000 feet, we had to drop the fire tank and install the hoist to get rid of some of the extra fire gear and take off," Karcher said.

Karcher was at the controls, keeping the helicopter steady as a rescuer was lowered to the ground. Once on the ground, the firefighter placed what's known as a screamer suit on the victim and hoisted her into the helicopter.

"We don't like to use the term textbook because it lulls us into complacency, but it went extremely well," McGough said.