VIDEO: Robbers in Hollywood shoot clerk with BB gun over case of beer 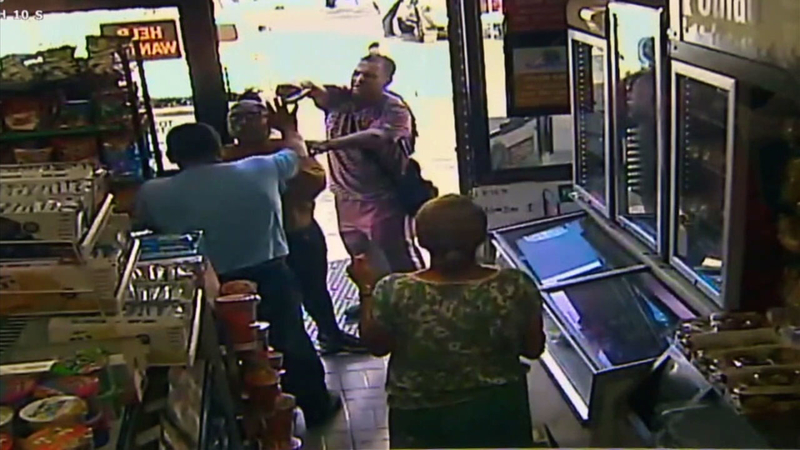 HOLLYWOOD, LOS ANGELES (KABC) -- A pair of suspects attacked a worker at a Hollywood gas station Wednesday, shooting him with a BB gun before taking off with a case of beer.

The shooting was reported about 5 p.m. near Melrose and Western avenues, where the clerk was found wounded. Los Angeles police said the man was conscious and breathing and transported to a nearby hospital.

Surveillance video shows the victim was beaten before and after one of the suspects pulled out the weapon.

A female suspect wearing yellow ran out of the gas station store with a 12-pack of beer, and the store clerk ran after her. After a confrontation, the clerk retrieved the beer and walked back inside the store. Moments later, the woman returns and a fight breaks out. As the employee tries to kick the woman away and shut the door, another woman stands by, shouting. A man then comes from behind and begins shooting with the BB gun.

From another angle, you can see the woman punch the employee several times. Later, the employee grabs a hold of her and throws her to the side. She grabs on to his shirt until he falls to the ground, where he's shot. The woman proceeds to get up and stomp on the employee.

After the beating finally ends, the woman walks away and, again, grabs a 12-pack of beer before the suspects walk out.

"I don't get it. They come, they still take the beer, but they're punching and shooting the guy," he said.

Rabizadeh said the employee is going to be OK. Meanwhile, police hope the clear surveillance video will help them identify the suspects involved in the robbery.