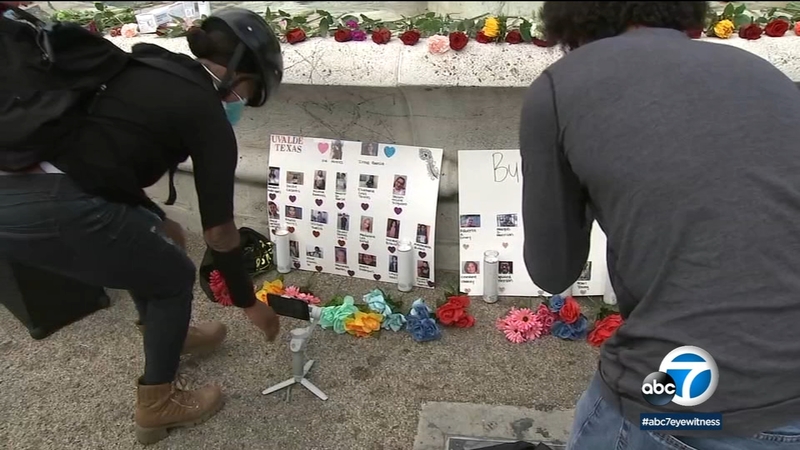 They say they're tired of this vicious cycle of violence, and sharing their grief helps in trying to heal from the overwhelming heartbreak.

"I think the majority of people are absolutely fed up," said the event's organizer Shelley Bruce. "I'm tired of grieving. I'm tired of my grief being a soundbite. I don't just want to make sure my voice is heard, I want to ask my representatives to take action on the things that a majority of Americans want."

New York officials give briefing from Buffalo following mass shooting at a supermarket in what they say was "racially motivated violent extremism."

The victims of the deadly massacre in Texas were certainly at the front of their minds, but they also honored those lost in the two previous mass shootings, in Buffalo at the grocery store, and at a church in Laguna Woods -- three mass shootings happening back to back over a matter of 12 days.

Those that gathered Saturday say the gun violence has to stop and say lawmakers finally need to enact stronger gun laws. They say uniting together is the only way to ensure change

RELATED | 1 dead, multiple others critically injured after shooting inside church in Laguna Woods

"We want to come together and create a safe space for everybody to just mourn and grieve on these travesties," said Anthony Bryson, from the CORE Movement organization. "Come together in a sense of healing before talking about what are the next steps, and how do we get a solution so that things like this don't happen again."

In Woodland Hills, another gathering honored the innocent victims. Moms demanded action by holding a gun violence vigil. Those who turned out at that event say it's time for action.

"What kind of country thinks that it's too dangerous to trust an 18-year-old with a six-pack of Coors, but it's fine for an 18-year-old to buy an arsenal of weapons," said Rep. Brad Sherman.

Many who turned out for Saturday's events urge all voters to use their voices to demand change to help save lives.