KABC
By ABC7.com staff
TRABUCO CANYON, Calif. (KABC) -- The man suspected of starting the Holy Fire had his bail set at $1 million after having several outbursts during his first court appearance on Friday.

Forrest Clark, 51, was heard shouting, "that's a lie!" and "correct" as the judge read the charges against him.

"I wasn't really surprised with anything we saw. I think it's just par for the course," said Jeffrey Kirk, with the Orange County District Attorney's Office.

Just a short clip of one of Forrest Gordon Clark’s outbursts during his first appearance before a judge today. He’s accused of starting the #HolyFire. @ABC7 pic.twitter.com/wBxKnUVQpr

Earlier Friday, PETA requested a cruelty to animals charge be added against Clark because of the wildlife that have lost homes in the blaze.

His bail was set for $1 million, to which he replied he "can have a million right now."

The fire Clark is accused of starting in Trabuco Canyon has charred more than 18,100 acres. It was just 5 percent contained as of Friday.

A man was arrested Wednesday in connection with the Holy Fire, which has burned more than 6,200 acres in the Cleveland National Forest.

Shane Sherwood with the Orange County Fire Authority said no witnesses have come forward saying they saw Clark start the fire, but the area of origin is around his residence.


Clark has reportedly had conflicts with his neighbors for years and sent an email warning, "This place will burn" to a volunteer fire chief last week.

Of the 14 cabins in his area of the fire, Clark's is apparently the only one still standing. Tillson Shumate, said he owns a cabin nearby and claims to be Clark's friend.

"He's threatened to bring the whole world down on OC and he's very worried about his mother's protection," he said.

People who know Clark said he had an ongoing feud with one neighbor and his erratic behavior. Sheriff's deputies also placed him on a psychiatric hold just two weeks ago. 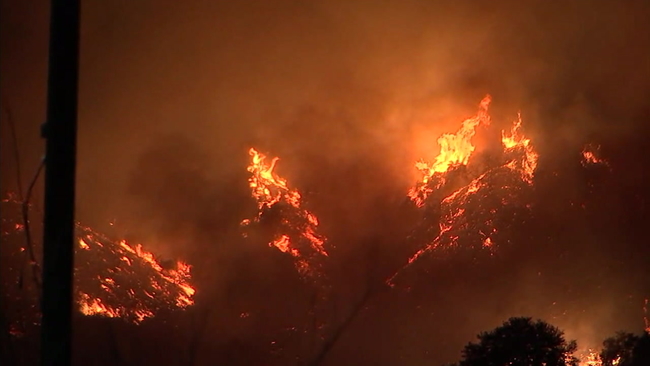