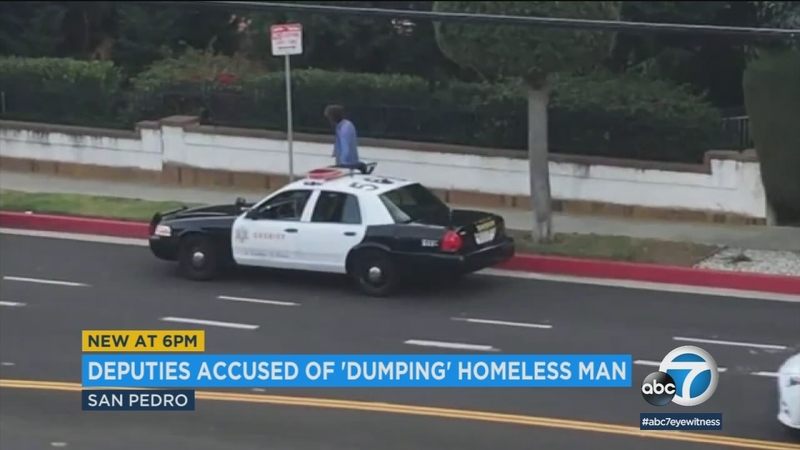 Residents and officials have long been concerned that deputies are dropping off homeless people with mental issues into neighboring jurisdictions rather than getting them services they need.

In this case, the man who was released in San Pedro was wanted on an outstanding arrest warrant.

Rather than arresting the man - later identified as John Bryan - and getting him assistance from public services, the deputies were seen dropping him off in San Pedro - in the jurisdiction of the LAPD.

The sheriff's department patrols nearby jurisdictions including communities like Rancho Palos Verdes where they originally made contact with Bryan.

The sheriff's department is denying that it engaged in dumping. Instead, the department said, the deputies dropped off Bryan near a bus stop where he could use his MTA pass. They chose not to arrest him out of compassion and because of jail overcrowding, they said.

City Councilman Joe Buscaino is outraged by the video. The deputies, he said, should have gotten the man some assistance.

"In the city of Los Angeles we've often been victim of patient dumping and we've had enough," Buscaino said.

Buscaino introduced a city council motion calling for an investigation into the incident.

"This happened on the same day that the LA County Board of Supervisors called for an updated definition to make it easier for first responders to place gravely disabled persons into care. Now is not the time to pawn off those with mental health issues onto adjacent jurisdictions, but rather, for all cities to step up to the plate and provide housing and services for the homeless immediately," Buscaino wrote on Facebook

The video was captured by local resident Mike Olivieri and posted on Buscaino's Facebook page.

Additional video provided to Buscaino's office by another resident showed the man a short time later clearly in distress on the ground being examined by paramedics across from a 7-Eleven store in the area.

The homeless man was later questioned by LAPD officers at the 7-Eleven and arrested on the warrant.

The Sheriff's Department issued a strong denial that it was engaging in dumping.

"Is arrest the answer? Is involuntary detention an answer? In some cases, yes. In this case, the deputies made a determination that that wasn't the answer," said Capt. Darren Harris with the Sheriff's Department.

A department statement said deputies made contact with Bryan that afternoon around 4 p.m.

The deputies say they asked him if he needed assistance. He asked for a ride to Pasadena, where he told them he lives. They said they couldn't drive him there, but they would bring him to a bus stop in San Pedro, as he had an MTA pass.

During the drive he asked to be dropped off a few blocks from the bus stop so he could go to a convenience store, they said.

He said Bryan was wanted on a $412 warrant for fare evasion on the transit system.

"The deputies determined they just wanted to help him. Out of an act of compassion and kindness, they were trying to help this individual rather than arrest him," Harris said.

Los Angeles County Supervisor Janice Hahn said she was concerned about the man seen in the video.

"Mr. Bryan clearly needed help," Hahn said. "I question whether or not our Sheriff's deputies could have done more to get him the help he needed before they left him and drove away."