Many living in tents on Skid Row turn to shelters, homeless programs amid harsh weather 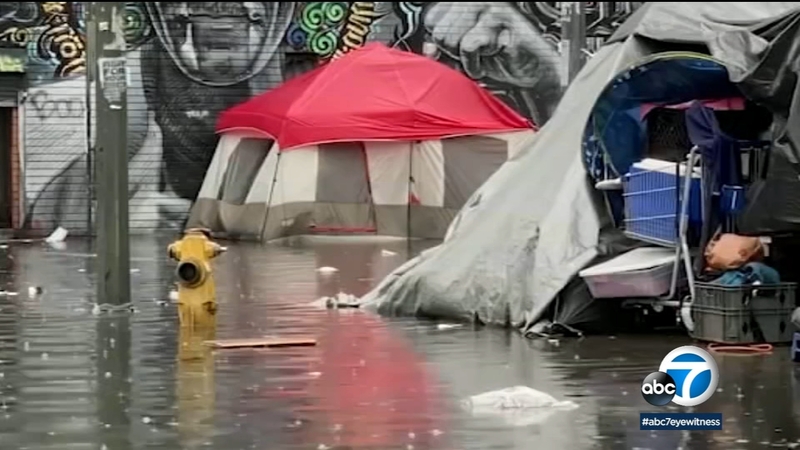 Some among the homeless population who have been living in tents along Skid Row for years are seeking more permanent shelter following plunging temperatures and heavy downpours.

Many were flooded out of their tents after the region was drenched in rain.

Sharon Meeks said she did fine living in her tent with her dog for years, but now she says she's had enough.

"I have been living on the streets a while. I am getting old and I am tired of being out here. I knew I deserved better. So I'm going into a program, trying to get my life together," she said.

Meeks was among hundreds who lined up Friday to receive a backpack of cold weather items from an outreach group called Highly Favored: A Blessing to Others.

The group's founder, Alexis Goudeau, is a registered nurse who says she was motivated by the number of people she saw on the streets as she was driving to her job.

"It is just a way of telling everyone they are highly favored. Everyone has a purpose in life," said Goudeau who was joined by a brigade of fellow nurses and volunteers. The program is one of many offering help during the holidays.

Meeks says that the persistent invitations from multiple non-profits on Skid Row opened her eyes to new possibilities.

Many people who live along Skid Row were flooded out of their tents after the region was drenched in in rain by a severe winter storm.

She is also mindful of her vulnerability living under layers of blue tarp with her dog, King. She said two people were recently found dead in their tent and another died sitting in her wheelchair. The Los Angeles Police Department confirmed one death from natural causes on Skid Row on Thansgiving Day.

Meeks knows she's at risk as she deals with a severe cough.

"I have COPD (Chronic Obstructive Pulmonary Disease) and just found out that I am a diabetic," she said.

The number of people huddled together in tents also raises concerns about public health.

As rain approaches, more LA homeless shelters opening - but is it enough?

"There are a lot of flu outbreaks, a lot of different infections living on the streets with the cold wet weather," Goudeau noted.

Meeks says the acts of compassion have helped turn her around and now she's urging others to join a shelter program just like she plans to.