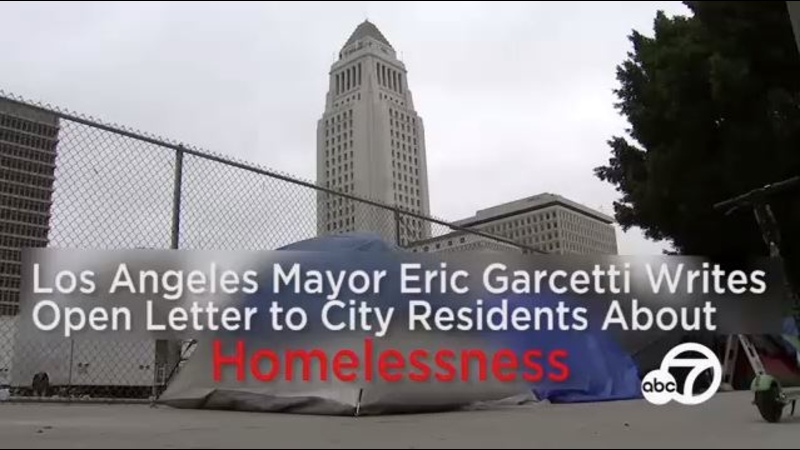 LOS ANGELES (KABC) -- Facing rising criticism for the sharp increase in homelessness, Los Angeles Mayor Eric Garcetti wrote an open letter to residents, defending the work being done by the city to address the problem while saying he takes "full responsibility'' for the city's response to the issue.

In a letter to Los Angeles residents, Garcetti insisted that more than 100 projects are in the works to provide more than 7,400 housing units for the homeless thanks to Proposition HHH, a $1.2 billion bond measure approved by voters in 2016 to fund homelessness programs.
EMBED More News Videos

A recent report shows the homelessness crisis in Los Angeles is getting worse. Tents and encampments can be found all over the city.

Homeless in L.A.: Scope of growing problem can be seen in aerial tour of city

Now, the most recent statewide data shows that California has 129,972 homeless residents, making our current homelessness crisis the second-worst disaster we've ever seen in the Golden State.

And one week ago, we received the sobering news that L.A.'s homelessness crisis is getting worse. There are now 36,300 homeless Angelenos in our city - a 16% increase over last year.

While we have housed more homeless Angelenos than ever before in our city's history, it's not enough. We must respond like it's an earthquake - and do more, faster.

The first job of ending this crisis is building housing. This past year, more than 21,000 homeless Angelenos were housed across the County, compared to 9,600 housed in 2014.

And we are putting more shovels in the ground. Working with the City Council, we have increased our homelessness budget to more than $460 million for housing and services - 25 times what it was just four years ago - and the County has contributed hundreds of millions more. Our expanded funding will open new bridge housing that can temporarily bring our homeless neighbors off the street, and supportive housing that gets people under a roof for good.

Since Proposition HHH passed, we have 109 homeless housing developments in the pipeline - more than 7,400 new units for our homeless neighbors.

L.A. added 16,525 units of new housing in 2018 - three times more than any other city in California. Every year since I was elected mayor, we have built between 15,000 to 17,000 new housing units, putting us on pace to reach our ambitious goal of building 100,000 new units two years ahead of schedule.

In December 2017, the City Council adopted my proposal to charge a "linkage fee" to developers of new commercial and residential projects, raising $1 billion for 17,000 affordable housing units over the next decade. And with Measure JJJ, we created new incentives to build more affordable and denser housing along our growing transit system. In the last 20 months, 16,400 units have been proposed under the Transit Oriented Communities program, 20% of which are reserved for low-income or extremely low-income residents.

But that's not enough, because Angelenos are becoming homeless faster than we can provide housing for them.

Unlike the 1994 Northridge Earthquake, this disaster didn't suddenly wake us out of our beds. Rather, it's the product of decades of failures. And bad decisions aren't just made - they accumulate. Decades of disinvestment and poor urban planning have conspired to limit our supply of affordable housing, reduce mental health services, lower the quality of education, gut our middle class, and allow addiction to take hold in too many lives.

Homelessness has been a problem for decades and is perhaps the most complex and difficult civic challenge we've faced in a generation. But with California's housing shortage, income inequality and high poverty, it's never been this bad before. It's time for a seismic shift in how we confront this crisis.

So in the weeks, months, and years ahead, we'll be bold and keep accelerating our work. We'll add more showers, bathrooms, storage units, and sanitation teams citywide. We'll cut red tape that delays new housing; in fact, this week, we're adding a team in my office to expedite building approvals for housing funded by Proposition HHH. We won't shy away from tough but necessary decisions to add new housing in our neighborhoods. And we'll strengthen the safety net that keeps people from becoming homeless in the first place, including starting a new legal assistance fund to help renters fight eviction.

We must continue to forge partnerships to overcome this emergency. Today, the City and County are working hand-in-hand - that wasn't always the case. But we cannot do this alone.

Our partners in Sacramento are helping - sending our city $85 million in emergency homelessness funding last year, along with another $81 million to our combined City and County efforts. This year, Governor Gavin Newsom proposed increasing the State's housing and homelessness funding to $1 billion. And we will continue calling for critical state legislation that strengthens protections for renters and incentivizes more affordable housing construction.

In Washington D.C., Senator Dianne Feinstein, Congressman Ted Lieu, and Congresswoman Maxine Waters have introduced legislation to dramatically increase federal funds for homelessness, and Congress should pass them into law. Housing isn't a partisan issue, and homelessness often results from problems that are being felt nationwide.

With Los Angeles' growing economy, I will rally the private sector to do more to ensure that our city's wealth is shared. If you're a business owner with a parking lot that goes unused at night, I'll ask you to open it up to people who live in their vehicles and need a safe place to park. If you're an executive for one of L.A.'s many successful startup companies, I'll ask you to hire homeless Angelenos and contribute to our cause. I'll ask more landlords to work with rehousing programs, so that families experiencing homelessness can make it out of shelters and into homes. And I'll ask everyone to welcome more affordable housing into our neighborhoods and learn more about how to help at LAMayor.org/HelpHomelessAngelenos.

As Angelenos, our ability to turn adversity into progress is what makes this the City of Angels. After the Northridge earthquake, we rebuilt the 10 freeway 74 days ahead of schedule. After Watts and Rodney King, we reformed public safety. And after the Great Recession, we went back to the basics and made City Hall and our economy work again.

We don't run from a challenge - we rise to it. And I know we will do so once again.