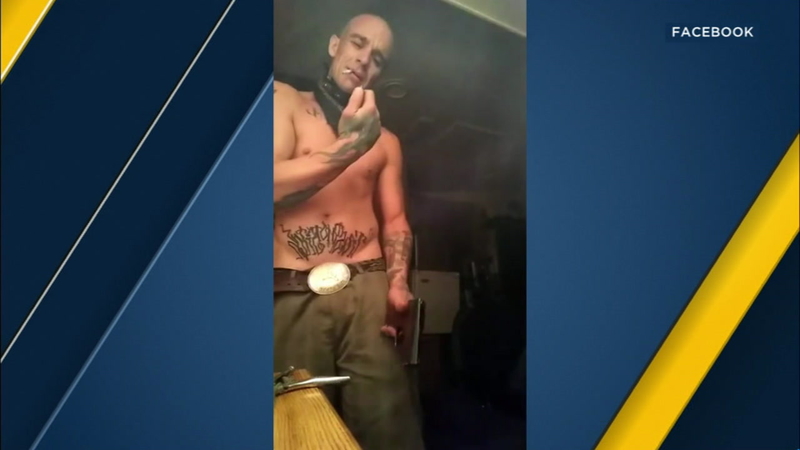 YUCCA VALLEY, Calif. (KABC) -- A suspect wanted for a double homicide in Nevada was involved in a car chase in Yucca Valley before he was shot by deputies during a shootout on Wednesday, according to the San Bernardino County Sheriff's Department.

Roger Tindell, 36, was shot by San Bernardino County Sheriff's deputies and taken into custody. He appeared to stream his pursuit live on Facebook.

The pursuit occurred early Wednesday morning after reports of gunfire, and authorities found a man shot.

Tindell is heard in the live stream claiming the woman alongside him in the vehicle is his hostage, but she appears to be the mother of his unborn child.

He tells police to "back off" or he would shoot the woman.

"Now I have to raise our son alone," the woman is heard telling Tindell in the video.

Shots fired by Tindell out the window are heard in the video while he drives.

Tindell was eventually shot by deputies and taken into custody, as was the woman alongside him.

Hours before the pursuit, Tindell streamed himself posing with a gun, likely the one used to fire at deputies.

Tindell was wanted for the Henderson, Nevada murders of 40-year-old Robin McComb and his 28-year-old girlfriend Mellisa Mason.

The pair were found with blunt force injuries to the head.

Although Tindell claimed his girlfriend was a hostage, she could be heard in the video giving him instructions on how to get away from police, so there is a possibility she may face charges as well.

Tindell was shot, but is expected to survive. He faces several charges, including attempted murder and felony evasion in California, and potential charges stemming from the double homicide in Nevada.