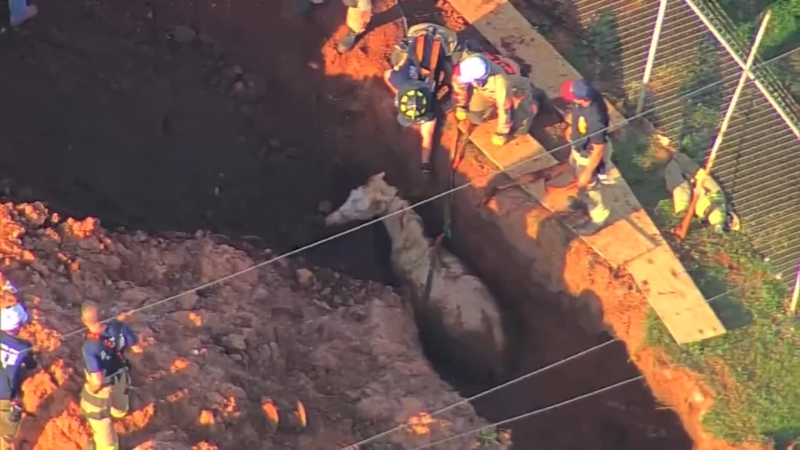 Video shows horse being rescued after hours stuck in trench

OKLAHOMA CITY, Okla. -- A horse named Shooter was stuck in a trench for about two hours before being rescued in Oklahoma.

The horse and its owner, Mark Knowles, have a 16-year relationship, and Knowles is just happy Shooter is doing OK, KOCO reported.

The horse's rescue was caught on camera.

"My emotions were running pretty wild, and he's been my pal for 16 years," Knowles said. "He was born on this place."

Knowles was doing his morning routine when he realized what was happening.

"I was in the kitchen just taking my meds, doing what I do, and my wife, she said, 'Mark, there's a horse over on Lincoln that fell in a hole.' 'Course when I came around, I know it was him right away."

Fortunately, Shooter was safely out of the trench shortly after that.

"Everybody chipped in to get him out; it's just, I'm thankful," Knowles said.

Fire officials said Shooter escaped his corral and made it into the trench.

RELATED: California teen back home after being kidnapped by man she met online, ending up in New York

"This was an open trench. When we arrived, the workers on scene advised us the horse was out of the trench, and when they arrived the horse got spooked and fell into the trench," a fire official said.

The trench in question was nearly 8-feet deep and muddy.

"The horse appeared to be standing, but there was a large amount of water in the trench, and it began to sink," the fire official said.

Using a rope and the excavator to make stairs, fire and construction crews got Shooter out nearly two hours later.

"It's always a good feeling. That's what we are here for is to meet the need no matter what the need is. The horse owner and the property owner were obviously very thankful in the job that was done," the fire official said.