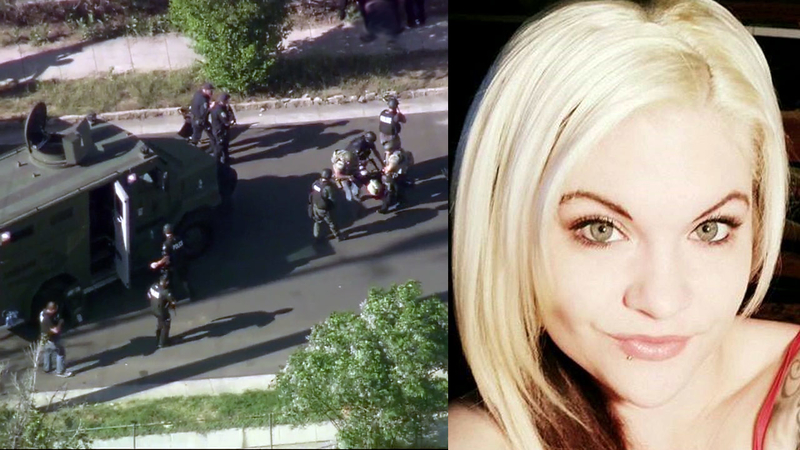 REDLANDS, Calif. (KABC) -- A man who was shot and killed by SWAT officers while he held his ex-girlfriend captive for two hours after shooting someone at an Office Depot in Redlands has been identified.

Officers moved in after the man, later identified as 29-year-old Andrew Mike of Downey, shot his ex-girlfriend in the torso, officials said.

SWAT officers shot and killed Mike, then quickly pulled the woman away from the scene, drove her off in an armored vehicle, loaded her into a helicopter and rushed her to a hospital.

The woman, who was identified by her father as Kristen Bauer, 28, was last described as in critical condition at Loma Linda Medical Center.

"He did fire at her," said Redlands Police Chief Mark Garcia. "Based on him firing at her, the officers fired at him to try to stop that threat and try to save her life."

Garcia said he observed the negotiations and the end of the situation closely and believes the officers acted appropriately.

"I was content with what the officers were doing to try to negotiate a safe release," Garcia said. "I think they did everything they could to try to make that happen. Unfortunately in this case we weren't successful."

The incident started around 2 p.m. Thursday when Mike walked into the Office Depot on Orange Street and began having an argument with his recently estranged girlfriend, who was an employee of the store, police said.

He fired at least one shot at Bauer, but missed, instead striking a bystander in the finger, according to officials.

Mike then forced Bauer out of the Office Depot at gunpoint and walked her to a nearby residential neighborhood. Officers confronted Mike as he and Bauer were walking on High Avenue east of Sixth Street.

He then held her hostage on a sidewalk for more than two hours as crisis negotiators tried to secure Bauer's release, officials said. Mike appeared to be holding his ex-girlfriend in a headlock at one point as they sat on the ground near a chain-link fence.

The father of Bauer told ABC7 his daughter tried to break up with the suspect earlier in the day.

"I don't know what happened man, something triggered him," said Greg Bauer, the woman's father.

Greg Bauer said he had spoken to his daughter by cellphone when the suspect first went into the Office Depot where she worked. He said he overheard his daughter telling Mike not to take her away. Greg Bauer also heard the suspect say he wasn't afraid to die before the phone connection went dead.

"I asked if she called the police and she said, 'Yes,' and that her manager was on the phone with the police. Then the phone went dead," Greg Bauer said.

Witnesses inside the store at the time of the shooting described hearing at least one shot before panic set in among customers who began fleeing.

"I heard a loud pop and it sounded like something fell and broke behind me," said witness Pauline Jaramilo. "I looked and I saw nothing so I went back to texting. Then some people were running out saying there's a guy with a gun in there and he's shooting."

"As I was running out the door I kind of stumbled and lost my sandal, but I kept running," Jaramilo continued.

The person struck by the bullet in the finger was taken to Loma Linda Medical Center for treatment.