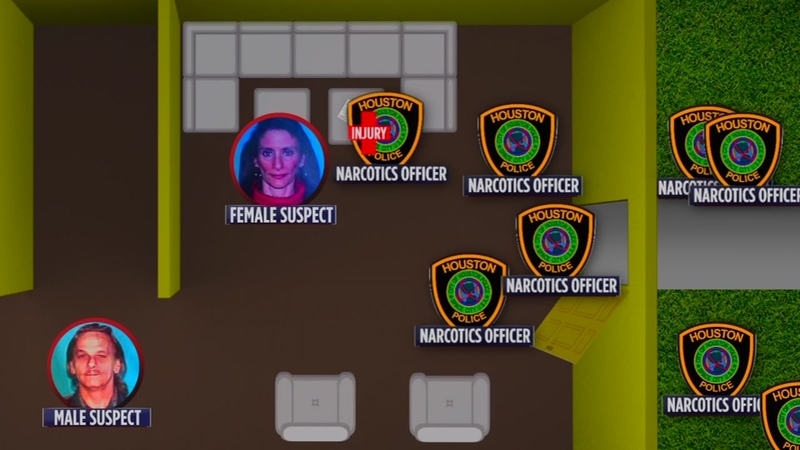 HOUSTON, Texas -- According to the police union, an officer has been temporarily relieved of duty after the shootout at an alleged drug house in southeast Houston that killed a couple and left five officers wounded.

The union would not confirm the officer's name, stating he is undercover.

The Houston Police Officer's Union issued the following statement: "Rumors continue to spread around the shooting last month on Harding Street where 5 police officers were injured and 2 suspects died. To be clear, officers were not on the wrong street and entry at that location was not made at random. We would refer you to the call slip from that location on January 8th, over 2 weeks prior to the shooting. We have confirmed that at least one narcotics officer has been relieved of duty due to ongoing questions that cannot be answered until the case agent is interviewed."

"Our Civil Rights Division prosecutors are currently working with the Houston Police Department's special investigation team to look at every aspect of this incident," Harris County District Attorney Kim Ogg said. "As is our policy, every shooting by a police officer - in every instance - is presented to a grand jury to determine if any criminal charges are warranted."

Houston Police Chief Art Acevedo said the officers "immediately came under fire" upon entering the home in the 7800 block of Harding on the city's southeast side in January. The suspects were killed. Four of the officers were shot and a fifth suffered a knee injury.

According to the warrant obtained exclusively by ABC13, police believed the occupants were selling heroin out of the home, based on a tip from a confidential informant.

An officer reportedly witnessed the informant buy heroin at the home on Harding. The informant described a man in the home, drugs and a weapon.

The warrant identified the home in detail, but did not name the alleged suspects.

Dennis Tuttle, 59, and his wife Rhogena Nicholas, 58, were killed in a gun battle when officers tried to serve the warrant.

Here is how the officer-involved shooting in southeast Houston unfolded.

Nine narcotics detectives backed up by at least six patrol officers surrounded the home on Harding Street just before 5 p.m. on Monday, Jan. 28.

After a 54-year-old officer, the lead investigator on the case, broke open the front door, a 33-year-old officer armed with a shotgun entered the residence and was immediately attacked by a pit bull, Acevedo said.

He said that the officer being attacked shot and killed the dog.

One of the suspects, Tuttle, charged from the back of the house firing a revolver at the officer, hitting him in the shoulder.

RELATED: What we know about the 2 suspects killed in officer-involved shooting in SE Houston
EMBED More News Videos

"He went down and fell on the sofa in the living room," Acevedo said of the wounded officer. "A female suspect went towards that officer, reached over the officer and started making a move for his shotgun."

Another officer who entered the house was allegedly shot by Tuttle.

He said the lead investigator who breached the door, entered the house and was also shot.

"After we had two officers down and another shot, the remaining officers ... started laying down cover fire, left positions of cover themselves and, I believe, they heroically pulled their fellow officers out of harm's way," Acevedo said.

He said Tuttle followed the retreating officers to the front door and continued to fire at them before he was shot and killed.

Police recovered two shotguns and three rifles from the residence and seized marijuana and a white powder they believe to be either cocaine or the powerful synthetic opioid fentanyl, Acevedo said.

All of the officers involved are undercover narcotics officers. Their names will not be released.